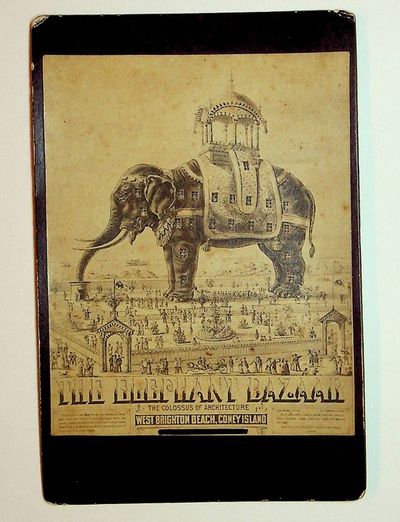 by Bradenburgh, C. A. [ manager ]; [ Lafferty, James V. patentee] ; [ Kirby, J. Mason, Architect]
[ no place ]: C. A. Bradenburgh, 1885. Photograph. Very Good. Mount is 4 1/4 x 6 1/2 inches, mounted photograph is 4 x 5 inches. Some foxing to the photograph, and a strikethrough at the base of image. Pasted on advertisement on rear of card is a Description of the Gigantic Elephant and comprises most of the card. Small loss affecting a few letters lower left. Photograph. Philadelphian James W. Lafferty was granted an architectural patent US268503A on December 5, 1882 in which he claims "My invention consists of a building in the form of an animal, the body of which is floored and divided into rooms, closets, &c., and the legs contain the stairs which lead to the body, said legs being hollow, so as to be of increased strength for properly supporting the body, and the elevation of'the body permitting the circulation of air below the same, the entire device presenting a unique appearance and producing a building which is well ventilated and lighted." The accompanying drawing shows an elephant with decorative building not unlike that depicted in this photograph.

"The Elephantine Colossus (also known as the Colossal Elephant or the Elephant Colossus, or by its function as the Elephant Hotel) was a tourist attraction located on Coney Island in Brooklyn, New York City. It was built in the shape of an elephant, an example of novelty architecture. The seven story structure designed by James V. Lafferty stood above Surf Avenue and West 12th Street from 1885 until 1896, when it burnt down in a fire. During its lifespan, the thirty-one room building acted as a concert hall and amusement bazaar. It was the second of three elephant buildings built by Lafferty, preceded by the extant Lucy the Elephant near Atlantic City and followed by The Light of Asia in Cape May." (wikipedia)

An instant success, Lafferty was eventually was forced to a Philadelphia group of investors. The back of the cabinet card is a substantial marketing piece we think from this group, noting the huge dimensions, location, heft and overall immensity of the object. This paste-on is signed in print C. A. Bradenburgh.

The photograph is probably a copy print, since the smaller details are not as sharp. Also, there is a black strike-out which is over the name of R. A. Lafferty (left intact on some other versions of this cabinet card). We suspect that this card was in circulation shortly after Lafferty sold out to the Philadelphia investors who hadn't yet had the time to make a new card. There appear to be at least a dozen versions of this card, some with and some without the information on the back, and some with Lafferty only attributions and some with Bradenburgh.

Regardless, a wonderful piece of Coney Island History. Sadly the attraction burned to the ground Sunday evening, Sept. 27, 1896 and was not rebuilt. We've included a circa 1958 postcard of the Elephant Hotel in Atlantic City NJ, another similar attraction, most probably the original Lucy the Elephant by Lafferty.

For more information: Sideshow World online has a great page on Lafferty and the various structures he had built that were invaluable to this writeup. (Inventory #: 28044)
$165.00 add to cart or Buy Direct from Kuenzig Books
Share this item