Secretary of State Thomas Jefferson Prepares to Return to Philadelphia for the Opening of Congress, Sending James Monroe to Deliver Him Money From Tobacco Sales From His Farm to Finance His Time at the Seat of Government Preparing to resume his controversy over the powers of government with Alexander Hamilton, he sends more tobacco to test the market in London. 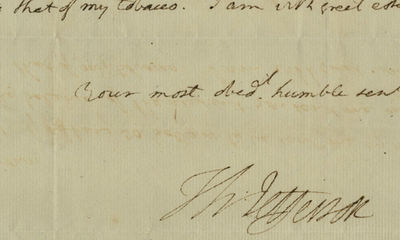 11/09/1792. Thomas Jefferson In August of 1792, the United States faced grave foreign policy challenges, both abroad in the form of increasing unrest in Europe after the French Revolution, and at home, where the U.S. feared that the Spanish in Florida and Louisiana were fomenting unrest with Native American populations. Meanwhile, Congress was adjourned, and the President and his Cabinet were for the most part at their respective homes.On the 23rd, President Washington wrote to Secretary of State Thomas Jefferson, ""If Spain is really intriguing with the Southern Indians....,I shall entertain strong suspicions that there is a very clear understanding in all this business between the Courts of London and Madrid; & that it is calculated to check, as far as they can, the rapid encrease, extension & consequence of this Country; for there cannot be a doubt of the wishes of the former (if we may judge from the conduct of its Officers) to impede any eclaircissement of ours with the Western Indians, and to embarrass our negotiations with them, any more than there is of their Traders & some others who are subject to their Government, aiding and abetting them in acts of hostilities.""Perhaps most damaging to the U.S. in Washington's mind was not this, however. It was a feud that had come into the open between Jefferson and Secretary of the Treasury Alexander Hamilton. Public articles blasting each other had appeared in the papers, and relations had grown openly hostile.  Washington continued his letter, saying ""How unfortunate, and how much is it to be regretted then, that whilst we are encompassed on all sides with avowed enemies & insidious friends, that internal dissensions should be harrowing & tearing our vitals. The last, to me, is the most serious—the most alarming—and the most afflicting of the two.""With all this going on, Jefferson planned to leave Monticello to return to Philadelphia for the opening session of Congress on November 5, 1792.  He would stop at Mount Vernon on the way to see Washington.Thomas Jefferson was a tobacco farmer, and much of his crop was at his Poplar Forest plantation in Bedford.  In late June, Jefferson wrote his son-in-law, Thomas Randolph, that, frustrated with the results of tobacco sales in Philadelphia, he would aim to try his luck at the London market.  Old friend, Alexander Donald, would aid him in this effort from England.  James Brown was a Richmond merchant who handled many of Jefferson's sales and imports to and from Europe.In September, preparing for his return to Philadelphia, he wrote Brown, to confirm that James Monroe would arrive to collect the money.Autograph letter signed, Monticello, September 11, 1792, to James Brown.  ""Dear Sir, According to what I mentioned in my letter of July 29. I have given orders to Bedford to handle his tobacco well and sort it, this year, for the London market, and to get it to Richmond with as little delay as possible, there to be delivered to you for consignment on my account to Mr. Donald. Perhaps I may take a couple of hogsheads of it to ship to another market, for a particular object.""Having occasion for money for my journey to Philadelphia, and Colo. Monroe setting out for Richmond, I take the liberty, according to the permission in your letter of Aug. 1. of asking 50. dollars to be sent me by him, which with the balance of the account you sent me must be placed to that of my tobacco. I am with great esteem Dr. Sir Your most obedt. humble servt., Th. Jefferson."" (Inventory #: 9333)
$21,000.00 add to cart Available from Raab Collection
Share this item