President John Tyler, Wanting to Protect the Slave Trade, Writes Former Secretary of State Daniel Webster for Reassurance That the New Webster-Ashburton Treaty Gave British Vessels No Right to Board and Inspect Suspected Slave Ships Flying the American Flag “I have read and now return the private dispatches with which you favored me from Mr. [Edward] Everett and your letter in reply. Lord Ashburton must certainly be under great mistake in relation to what passed between you on the right of visit and of sea 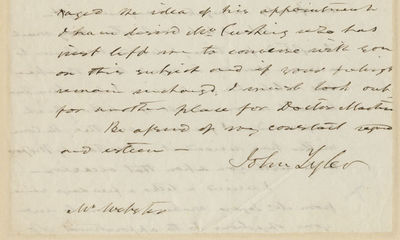 22/05/1843. John Tyler Our first presidential letter about the Webster-Ashburton Treaty, which settled the border between the United States and CanadaDuring Daniel Webster’s first term as Secretary of State (1841–1843), the primary foreign policy issues involved Great Britain. These included the northeast borders of the United States, the involvement of American citizens in the Canadian rebellion of 1837, and the suppression of the international slave trade. The Webster-Ashburton Treaty, signed August 9, 1842, resolved these frictions in Anglo-American relations.On April 4, 1842, British diplomat Lord Ashburton arrived in Washington at the head of a special mission to the United States. The first order of business was settling the border between the United States and Canada. Several disputes had arisen from differing interpretations of the 1783 Treaty of Paris that ended the Revolutionary War. When these differences led Canadian officials to arrest some Americans in disputed areas, Maine called out the militia and seized the territory in question, in the so-called Aroostock War. The incident dramatized the need for a border settlement. Webster and Ashburton agreed on a division of disputed territory, giving 7,015 square miles to the United States and 5,012 to Great Britain; they also agreed on the international boundary line through the Great Lakes to the Lake of the Woods; reaffirmed the location of the border in the westward frontier up to the Rocky Mountains; and agreed that the two parties would share use of the Great Lakes. The treaty also defined seven crimes subject to extradition. And at British urging, the treaty called for a final end to the slave trade on the high seas, and their negotiators had wanted to make a “right of search and visit” part of the treaty. The Americans resisted this - as it effectively would have meant that one country’s naval vessels could and inspect board ships of the other that were suspected of carrying slaves. But the U.S. did agree that U.S. warships would be maintained off the coast of Africa to search suspected slavers flying the American flag. Unfortunately, the United States would not implement this part of the agreement very vigorously.Tyler was selected as Whig William Henry Harrison’s vice president in the 1840 election, but as president he moved farther and farther away from Whig positions and began preparing a campaign for the Democratic nomination in the 1844 election. Webster came under pressure from fellow Whigs to resign, and he left office May 8, 1843. With Webster - a slavery opponent - gone, slave owner and proponent Tyler turned his attention to the annexation of Texas. But first he wanted to make sure that nothing that passed with Webster and others associated with the Ashburton treaty could possible give the idea that American ships illegally carrying slaves could be stopped and searched by the British. He wrote Webster asking for this assurance, even while refuting the idea himself.Autograph letter signed, as President, two pages, Charles City County, Va., May 22, 1843, to Webster. “I have read and now return the private dispatches with which you favored me from Mr. [Edward] Everett and your letter in reply. Lord Ashburton must certainly be under great mistake in relation to what passed between you on the right of visit and of search. Most certainly but one language has been held in all our Cabinet consultations, which was uniformly in negative of any such right.“When I left Washington, being much straightened for time, I desired Mr Spencer to answer for me in regard to the Bunker Hill celebration, and since I have been here he sent me on a draft of a letter which I approved. I presume ere this the committee has received it. I certainly propose to be with you upon that occasion. I received a letter a few days since from Mr Legare making known to me your objections to the appointment of Doctor Martin as Chief Clerk in the State Department. I was not aware before that you had any personal objections to the Doctor, and it occurred to me that his appointment to that place would leave me more at liberty upon the subject of the Head of the Department. I had not perceived either that the Spectator had taken any personal ground. Most certainly if such had been known to me, I would not for a moment have encouraged the idea of his appointment I have desired Mr Cushing who has just left me to converse with you on this subject and if your feelings remain unchanged, I must look out for another place for Doctor Martin. Be assured of my constant regard and esteem."" (Inventory #: 18019)
$11,000.00 add to cart Available from Raab Collection
Share this item