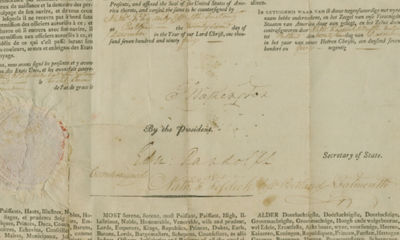 by George Washington
22/12/1795. In the early days of the American republic, ships leaving U.S. ports for foreign shores were required to have passports, and both the president and secretary of state frequently signed these documents. For a period, passports signed by Washington as President were also signed by Edmund Randolph as Secretary of State.Born in Devonshire, England, William Widgery immigrated to America with his parents, who settled in Philadelphia. He became a shipbuilder and served in the Revolutionary War on a privateer. After the war, he studied law and was admitted to the bar and commenced practice in Portland, Maine (then Massachusetts). He served as a member of the Massachusetts House of Representatives 1787-1793 and 1795-1797, and the State senate in 1794. He also served in Congress, and as a delegate to the State constitutional convention in 1788. Widgery was also engaged in trade abroad as a ship’s captain, using skills he learned as a privateer.Widgery was a noted opponent of the U.S. Constitution, unless and until a Bill of Rights was included. He was gratified when one was passed, and thereafter remained a strong supporter of James Madison, father of the Bill of Rights. His last major activity was to promote Maine as a separate state, which took place in 1820. He died soon afterwards.Document Signed as President, Washington, December 22, 1795, being a passport for the Ship John of North Yarmouth, at that time in Portland, ME, with Widgery as Captain, heading to Barbados, ""leaden with Boards... staves, bricks, frames, pickled and dried fish..."". Archivally repaired.Also signed by Edmund Randolph as Secretary of State and countersigned by Nathaniel Fosdick as collector of customs at Portland and Falmouth. (Inventory #: 19375)
$23,000.00 add to cart Available from Raab Collection
Share this item