Jean-François Champollion, Who Lit the Candle That Illuminated Ancient Egypt, Seeks to Protect the Egyptian Antiquities Under His Care at the Louvre A very rare autograph: he decoded Hieroglyphics, and a substantial amount of our knowledge of the ancient world stems from his work 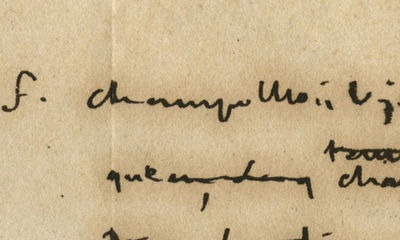 21/09/1830. Jean-François Champollion Concerned about the safety of the artifacts under his care as Keeper of Antiquities at the Louvre, he seeks to avoid military serviceHistorically, scholars thought Hieroglyphics a complete mystery unlikely ever to be solved, and virtually nothing was known of Ancient Egypt nor understood of the writing it had left behind. Then, in 1799, Napoleon's troops discovered a stone in Rosetta, Egypt written in Greek, Hieroglyphics and Demotic, a cursive form of Hieroglyphics. The stone's contents were readily understood from the Greek, but the Hieroglyphic images remained indecipherable. Champollion was a child prodigy who graduated from language courses at age 11, and became a full professor at 19. He turned his attention to the Rosetta Stone to try and solve the puzzle. He determined that figures within ovals, called cartouches, represented proper names, then deciphered the names of Cleopatra and Ptolemy. These became the key to his unravelling the rest of the text. Champollion’s feat marked the first time an ancient script had been deciphered; others followed suit inspired by his success. He was appointed Keeper of Antiquities at the Louvre Museum in 1826.During the revolution of July 1830, the Louvre was ransacked by soldiers, damaging many of the artifacts in Champollion's care. And with a draft call out, he was concerned that he would be drafted and the priceless objects under his care and custodianship might be further imperiled.Autograph draft of a petition, signed, Paris, likely dated 21 September 1830. “J. F. Champollion the young member of the Institute states that as he is charged with the public and daily service as curator of the antiquity museum the Louvre, and Professor of Egyptian Language and Archeology at the same museum, he would like to request temporarily and until the promulgation of the definitive law of the National Guard, an exemption from service granted by Imperial Decree not yet repealed, to Professors attached to public institutions. The petitioner leaves the rest entirely to the decision of the family counsel of the legion and will voluntarily conform to whatever that may be.""Champollion’s work was strongly supported by his brother, Jacques-Joseph Champollion-Figeac, Professor of Greek at Grenoble and later Curator of Manuscripts at the Bibliothèque Nationale, who published his Egyptian grammar and dictionary after his brother’s premature death. On July 15, 1832, he sent this draft petition as a sample of his late brother’s handwriting to Lérat de Magnitot, author and antiquarian. That cover letter is present and included, and reads “I have the honor to send to to Monsieur Lérat de Magnitot a sample written by my poor brother. It’s the manuscript to be exempted from national guard service...”This is only the second time we have ever had Champollion’s autograph, the last time being in 2004. It is also just the fourth example we have ever seen. (Inventory #: 19010)
$10,000.00 add to cart Available from Raab Collection
Share this item