Dolley Madison Laments the Fatal Illness of Her Sister Polly In A Document Also Signed by James Madison She writes her brother-in-law, saying ??your letter has plunged me in the deepest distress! What can I do for that beloved sister whose image and whose sufferings, I can say with truth, have never for an hour been absent from my mind? Week after week have 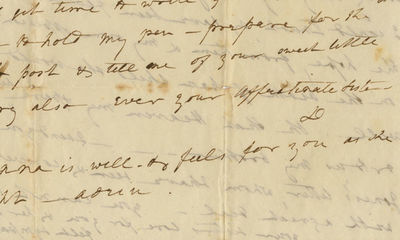 12/01/1807. James Madison|Dolley Madison A rarity: James Madison has free franked the address panel, thus the handwritings and signatures of both James and Dolley Madison on the same pieceIn 1807 James Madison was Secretary of State under President Thomas Jefferson. His wife, Dolley Payne Madison, was known for her charm and social graces. She sometimes acted as First Lady for the widowed Jefferson, and when her husband assumed the presidency in 1809, she virtually defined that role. She remains the most famous First Lady in American history.John G. Jackson was an eminent Virginia lawyer. In 1800 he married Mary ""Polly"" Payne, the youngest sister of Dolley. Polly and John had a daughter Mary in 1805. Polly contracted tuberculosis soon after, and that disease was then a potentially fatal illness. Her condition worsened in 1807, and she died February 13, 1808 after much suffering, aged 26. Jackson went on to become a Congressman, and was appointed the first Federal Judge of the Western District of Virginia. His nephew was Stonewall Jackson, who at age 12 requested to come live with him, to no avail.On January 7, 1807, John wrote to Dolley Madison about the the worsening of PollyÕs condition, which would prove irreversible. She replied, brokenheartedly. Autograph letter signed ÒDÓ, and ÒJames Madison,Ó Washington, January 12, 1807. ""Oh, my dear brother, your letter has plunged me in the deepest distress! What can I do for that beloved sister whose image and whose sufferings, I can say with truth, have never for an hour been absent from my mind? Week after week have I looked and prepared to receive and to nurse my dear Polly, and now, alas! she is too ill to expect at all. I have consulted everybody, my dear Jackson, whose judgment I could trust, and have been nattered with the hope, from them and my own opinion, that she would get well. Oh that Heaven may spare her to you and to us, my brother!""I send you Doctor Jones's letter, whom I have seen and conversed with a great deal. You cannot doubt your sister's [DolleyÕs] love for you, and her soul-felt sympathy. Hasten to tell me your hopes are revived, and that I may yet see you leading to us my precious sister and your children. How dreary, how forlorn, does this world appear without you all! I cannot express to you the desolation that seems to surround me since I received yours of the 7th.""All here is bustle and confusion, on account of Rose's arrival, the quarrels in Congress, and the multitude of strangers; but it falls upon my senses like the gloom of death! I hope Mr. Madison will get time to write to you. I feel scarcely able to hold my pen. Prepare for the next post, and tell me of your sweet little Mary also.ÒEver your affectionate sister.Ó She adds a PS: ÓAnna is well, and feels for you as she ought. Adieu."" The address panel is in her hand. The Anna to whom he refers is her sister, Anna Payne Cutts. This is an extremely early letter of Mrs. Madison. A search of public sale records going back 40 years shows just two dated earlier.Significantly, the address panel is free franked by her husband, James Madison. Thus an extraordinary rarity: the handwriting and signatures of both James and Dolley Madison on the same piece. (Inventory #: 16921)
$6,000.00 add to cart Available from Raab Collection
Share this item