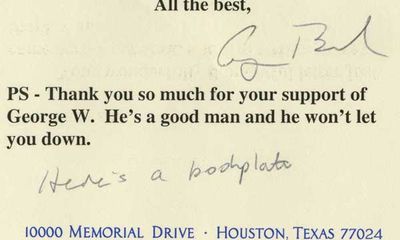 by George H.W. Bush
21/12/1999. Sarwar A. Kashmeri is a specialist and commentator on U.S.-European relations, and fellow of the Foreign Policy Association. He is the author of “America and Europe After 9/11 and Iraq: The Great Divide”, and “NATO 2.0: Reboot or Delete?”, in which he provides insights into NATO and the future of the transatlantic alliance. In his travels and research, he has met, interviewed, and worked with numerous world leaders, including British prime ministers Margaret Thatcher and John Major, and U.S. President George H.W. Bush. He maintained a correspondence with the latter over the course of years.On June 12, 1999, Bush’s son George W. Bush announced that he was a candidate for the Republican Party’s nomination for president. Kashmeri wrote to the elder Bush expressing support for his son, and mentioning the possibility of his writing a memoir. Bush, who maintained a very low profile during his son’s runs for president, responded forthrightly (and somewhat atypically) with a prediction on George W’s performance in office. He also declined to write a memoir, leaving assessments of his term in office to the historians. The club mentioned is the Union League Club in New York City.Typed letter signed, on his personal letterhead, Houston, December 21, 1999, to Kashmeri. “Your wonderfully thoughtful letter just came across my desk, and I’m writing to say thank you. Although I was never really interested in writing a memoir - historians can decide the ups and downs of my time in office - I did want to let others know about what I call ‘heartbeat’. Kind words mean a lot to me these days, Sarwar, and yours were sure appreciated. Hopefully, our paths will cross the next time I’m at the Club. All the best, George Bush.” He then adds a P.S. “Thank you very much for your support of George W. He’s a good man and he won’t let you down.” The envelope is still present.In 2013, Bush published his letters and writings, but never did write that memoir. (Inventory #: 13441)
$3,500.00 add to cart Available from Raab Collection
Share this item