Harry Truman on Death: “It is something we all know will come eventually, but none of us are ever ready for it.” . 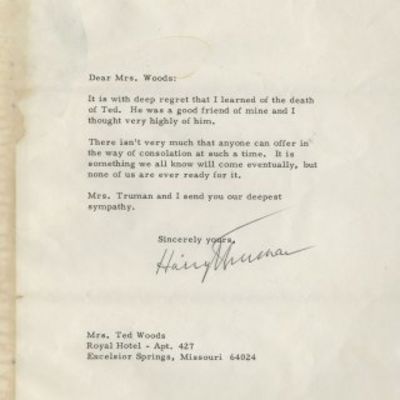 by Harry Truman
3/12/69. Ted Woods had served with Truman in the 35th Infantry Division in World War I, and Woods was later president of that division’s veteran’s association. Truman liked to keep track of his old comrades in arms, and the Truman Library hosted functions for that group.Woods died in 1969. Truman was then 85 and facing his own mortality.Typed letter signed, on his letterhead, Independence, Mo., December 3, 1969, to Mrs. Ted Woods, pondering the inevitability of human mortality, and the inability to ever be really prepared for it. “It is with deep regret that I learned of the death of Ted. He was a good friend of mine, and I thought very highly of him. There isn’t very much that anyone can offer in the way of consolation at such a time. It is something we all know will come eventually, but none of us are ever ready for it.”Truman died three years later. (Inventory #: 8645)
$2,200.00 add to cart Available from Raab Collection
Share this item