The Famous Photograph of President Theodore Roosevelt and His Family at Sagamore Hill in 1903, Signed by TR to His Wife and Children Essentially unique, this is the only photograph we have ever seen signed by any American president to his entire family 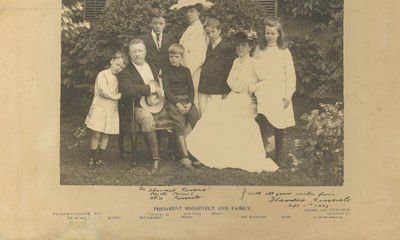 1/9/03. Theodore Roosevelt This large, 12 by 14 inch photograph bears the noted Pach Brothers studio imprintOn July 12, 1903, photographers from the Pach Brothers photographic studio traveled to Sagamore Hill in Oyster Bay, New York, the home of President Theodore Roosevelt and his family, and the summer White House. There TR, his wife and children were taking some time off from the heat of a Washington summer to enjoy the breezes of Long Island Sound.The Pach Brothers, noted photographers of the day, arrived and took a famous photograph of the family in the yard at Sagamore Hill, showing the President and First Lady surrounded by their children, from left to right: Quentin, President Roosevelt, Theodore Jr., Archie, Alice, Kermit, First Lady Edith, and Ethel.This, an oversize 12 by 14 inch version of that photograph with the Pach Brothers imprint and 1903 date, is signed by TR: “To Theodore Roosevelt [Jr.], Edith Kermit [his wife’s maiden name], Alice Roosevelt [his daughter by his first marriage], and Archie, Kermit and Quentin [whose three names have faded or been scratched out, but are partly legible]; with all good wishes from Theodore Roosevelt, September 1st, 1903.” Professionally conserved.This photograph is a great rarity, as we can only recall seeing three other copies of this image signed by Roosevelt in at least four decades. But far more importantly, it is the only photograph we have seen signed by TR to his entire family (and, in fact, the only photograph we have seen signed by any American president to his family). (Inventory #: 19966)
$17,500.00 add to cart Available from Raab Collection
Share this item