The Nation’s Only Handicapped President Shows How He Dealt With Illness Pres. Roosevelt on Overcoming Adversity: “Make the most out of your life in spite of its handicaps...”. 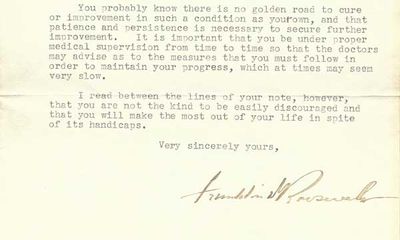 13/02/1934. Franklin D. Roosevelt In 1921, with the 39-year-old energetic Franklin D. Roosevelt poised for a long and successful career, he was suddenly struck ill with a severe case of polio that left him paralyzed from the chest down. At that time, there was no vaccine to prevent the disease, nor even any effective treatment, and there was a certain stigma attached to it. The practice of the day was to hide the afflicted person away from the public eye.Roosevelt, a confident and some would say pampered and smug man, was advised to settle into a life of confinement and inactivity. However, he was not willing to give up; he was a fighter and determined to beat the disease. Hope was born when Roosevelt heard of a young polio victim who was able to walk again after swimming in the warm waters of a health spa at Warm Springs, GA, near Atlanta. In 1924 he moved to Warm Springs. After his initial disappointment with the rundown conditions and the frustration that came with his continued inability to walk, Roosevelt developed a deep appreciation for the pain and suffering of others and even an optimism and inspiration that polio victims could be helped there. In 1926, he invested two-thirds of his savings to purchase Warm Springs for $200,000, and created a cutting edge therapeutic center under the direction of the Georgia Warm Springs Foundation. His facility opened its doors to patients all over the country, providing medical treatment and an opportunity to spend time with others suffering from the effects of polio. Patients at Warm Springs were invigorated and re-learned to enjoy life.During the years of his illness, Roosevelt underwent a spiritual transformation. The disease had humbled him, and he became an empathetic man who, having been to the depths of despair, was able to understand the problems with which  people had to contend. It was this spirit that empowered FDR and pushed him to return to political life and run for President. It also played a key role in helping him perservere during the Great Depression and World War II.You are not the kind to be easily discouraged and that you will make the most out of your life in spite of its handicaps.In 1934, a year when unemployment averaged 20% and FDR was battling the Depression, a girl named Ruth Spahn from Altoona, PA, wrote to Roosevelt, seeking some words of encouragement from a man who had overcome his affliction to become President of the United States. Despite the turmoil of the country and business on his schedule, he took the time to answer her personally in a stirring letter that embodied the attitude and spirit that indeed inspired Roosevelt himself to overcome adversity. Typed Letter Signed on White House letterhead, February 13, 1934, to Ruth Spahn. “I am glad that you felt like writing to me about yourself, and only wish that I could be of some very definite assistance to you. From your letter I am confident that you have had very excellent medical care. You probably know there is no golden road to cure or improvement in such a condition as your own, and that patience and persistence is necessary to secure further improvement. It is important that you be under proper medical supervision from time to time so that the doctors may advise as to the measures that you must follow in order to maintain your progress, which at times may seem very slow. I read between the lines of your note, however, that you are not the kind to be easily discouraged and that you will make the most out of your life in spite of its handicaps.” The letter comes with its original envelope.Franklin Roosevelt felt such a kinship with those suffering from polio that he spent much of his time at Warm Springs. He even chose a secluded hillside near the springs to build a home, which soon became known as the Little White House. He died there in 1945. (Inventory #: 6709)
$6,500.00 add to cart Available from Raab Collection
Share this item