Thomas Mann Writes of Penning ""Buddenbrooks"" in Solitude and Reflects Philosophically on the Impact of his Work Worldwide "The young man who wrote that book in his solitude, could not have dreamed that it would be his calling in life to influence the intellectual life of people"" 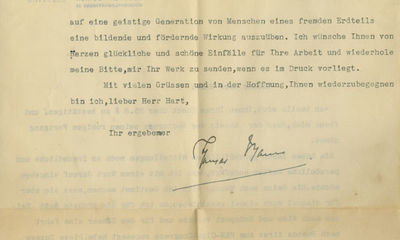 16/04/1936. Thomas Mann An incredibly rare and unpublished letter relating to his perhaps his most famous work1936 was a momentous year for Mann. That year, his escalated attacks on the Nazi government led to his German citizenship being revoked. He traveled to Argentina, his maternal homeland, for a PEN International Conference, which was organized to bring peace and understanding between cultures using literature.In 1900, at the age of 25, Thomas Mann wrote and in 1901 published Buddenbrooks, chronicling the decline of a wealthy north German merchant family over the course of four generations. Mann drew deeply from the history of his own family, the Mann family of Lübeck, and their times. It was Mann's first novel and it made him a major literary figure. The work led to a Nobel Prize in Literature for Mann in 1929; although the Nobel award generally recognizes an author's body of work, the Swedish Academy's citation for Mann identified ""his great novel Buddenbrooks"" as the principal reason for his prize. Mann began writing the book in October 1897, when he was twenty-two years old. The novel was completed three years later, in July 1900, and published in October 1901.Henry Hart was an American publisher who worked mainly for Scribner's in New York. He was working with Mann on the publication of English-language versions of his works, including Nocturns.Typed letter signed, in German, to Hart, April 16, 1936.""I am hurrying to acknowledge receipt of your check from August 25th and am happy that sales of the “Nocturnes” are gradually progressing.""You have added some very personal notes to your letter hat I would like to address with a few words. The trip to Moscow I will definitely make, but will have to postpone it for now, since I have travel plans to Vienna and Budapest in the immediate future. For the summer I have agreed to travel to Bueno Aires for the PEN Club Congress. I had committed to this trip a while ago, and therefore have to travel there first. This trip is especially enticing to me, since it will take me to Rio de Janeiro. It is the home of my mother, who often told me about the beauty of the coast when I was a child.""I was very touched about what you told me regarding your repeated studies of the novel of my youth. I finished it when I was 25 years old. The young man who wrote that book in his solitude, could not have dreamed that it would be his calling in life to influence the intellectual life of people in a foreign continent in a educating and encouraging way. From the bottom of my heart, I wish you have happy and beautiful ideas for your work and am repeating my request to please send me a copy your book, once it is printed."" (Inventory #: 18188)
$5,500.00 add to cart Available from Raab Collection
Share this item