Vice President Millard Fillmore is Grateful to Be Invited to Celebrate the 75th Anniversary of the Battle of Bunker Hill A very scarce letter of Fillmore as Vice President, an office he held little more than a year 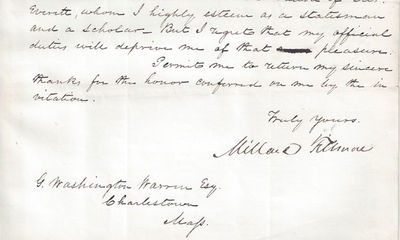 05/06/1850. Millard Fillmore This letter was at one time in the papers of George Washington Warren, president of the association and its chief historian and has never before been offered for sale.On June 17, 1775, the British army under General William Howe, supported by Royal Navy warships, attacked the defenses the colonists had erected on Bunker and Breeds Hills. The British troops moved up Breeds Hill in perfect battle formations. Patriot leader William Prescott allegedly encouraged his men “not fire until you see the whites of their eyes.” Two assaults on the colonial positions were repulsed with significant British casualties; the third and final attack carried the position after the defenders ran out of ammunition. The colonists retreated to Cambridge over Bunker Hill, leaving the British in control of Charlestown but still besieged in Boston. The battle was a tactical victory for the British because they held the ground, but it proved to be a sobering experience, involving more than twice the casualties than the Americans had incurred, including many officers. The battle had demonstrated that inexperienced Continental militia could stand up to regular British army troops in battle, at a time when the British were considered to have the finest army in the world. It encouraged revolutionaries throughout America, and made the success of such a revolution actually seem possible.In 1823, Edward Everett, Daniel Webster, famed physician John C. Warren, and others co-founded the Bunker Hill Monument Association, which sought to memorialize that battle with a grand monument. They petitioned the Massachusetts House and Senate for recognition and support and a subsequent Act was passed giving both. Then began the work to draw interest, raise money, design the monument, and build it, a years-long effort that created the first major monument to the American Revolution, and the first public obelisk in the United States. In 1824 and 1825 they began notifying the public of their work, elected their officers, and then wrote a circular eliciting donations, and elected prominent men honorary members. They informed these men, and the responses the committee received back were from many great men of the era, including Thomas Jefferson, James Madison, James Monroe, John Marshall, John Quincy Adams, Henry Clay, Oliver Wolcott, Joseph Story, and the Marquis de Lafayette. Soon Simon Bolivar was added to the list.For the 75th anniversary of the battle, June 17, 1852, the Bunker Hill Monument Association planned a celebration. George Washington Warren, President of the Bunker Hill Monument Association, invited Vice President Millard Fillmore to attend the festivities, but he had to decline.Autograph letter signed, as Vice President, Washington, June 5, 1850, to Warren. “I have the honor to acknowledge the receipt of yours of the 31st let. enclosing an invitation to attend the celebration of the seventy-fifth anniversary of the Battle of Bunker Hill. I should be much gratified to be with you on the occasion and to hear the oration of Mr. Everett, whom I highly esteems a statesman and a scholar. But I regret that my official duties will deprive me of that pleasure. Permit me to return my sincere thanks for the honor conferred on me by the invitation.”This is a very scarce letter of Fillmore as Vice President, an office he held little more than a year.This letter was at one time in the papers of George Washington Warren, president of the association and its chief historian and has never before been offered for sale. (Inventory #: 18970)
$2,000.00 add to cart Available from Raab Collection
Share this item