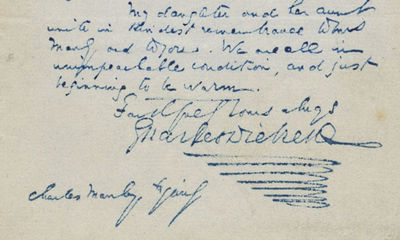 by Charles Dickens
12/07/1869. An uncommon letter of Dickens mentioning one of his most memorable literary characters and symbols, and showing its application to the world of math and scienceCaptain Cuttle is a memorable character in Dickens' work ""Dombey and Son"". Besides the hat and the hook, Captain Cuttle's possessions consist of a watch, two teaspoons, and a set of sugar-tongs. All sailors depend on reliable timepieces; ""Put it back half an hour every morning,"" the Captain says, ""and about another quarter towards the arternoon, and it's a watch that'll do you credit.""The symbol of this watch returns throughout the book, and today, there are watches made in the style of its large silver face.Charles Malby was a well-known British engineers of the mid-19th century, his long career beginning when he assisted his father in building and sailing the world’s first sea-going iron steamboat. Moving spirit of the British Institute of Civil Engineers at the height of the era of invention, he was also Samuel Colt’s personal choice to oversee the American’s firearms establishment in London – in which capacity, in 1854, he gave a personal tour of Colt’s gun-making factory to his “great friend” Charles Dickens, one of Manby’s many literary acquaintances. Interestingly, while Manby was widely respected for “his intimate knowledge of the most important and gravest paths of the scientific world”, at the same time, he was “associated with the inner circles of the most brilliant theatrical society.”George Parker Bidder was an English engineer, architect and calculating prodigy. In childhood, his father, William Bidder, a stonemason, exhibited him as a “calculating boy”. In 1837 he was engaged with Robert Stephenson in building the Blackwall railway, and it was he who designed the peculiar method of disconnecting a carriage at each station while the rest of the train went on without stopping, which was employed in the early days of that line when it was worked by means of a cable. He also advised on the construction of the Belgian railways; with Robert Stephenson he made the first railway in Norway, from Christiania to Eidsvold; he was engineer-in-chief of the Danish railways, and he was involved with railways in India. He was also one of the founders of the Electric Telegraph Company, which enabled the public generally to enjoy the benefits of telegraphic communication. In hydraulic engineering, he was the designer of the Victoria Docks.He and Manly were both officers at the Institution of Civil Engineers. The minutes of this organization shows a debate in 1869 around the construction of waterways in England, and the measurement being similar to that of Captain Cuttle's watch, which had to be adjusted to tell the right time.Autograph letter signed, on his Gad’s Hill Place letterhead, Rochester, to ""My dear Manby,"" July 12, 1869. ""I am cordially obliged to you, both for your note and its enclosures. The speech of Mr. Bidder's is like everything he does: the soundest of sound sense, tersely expressed and with a noble absence of all flourish or pretense. I am proud of his acquaintance with Captain Cuttles watch and if you will tell him so when you have an opportunity, I shall be still more obliged to you.""My daughter and her aunt write in kindest remembrances to Mrs. Manly and to you. We are all in unimpeachable condition and just beginning to be warm.""An uncommon letter of Dickens mentioning one of his most memorable literary characters and symbols. (Inventory #: 18304)
$8,000.00 add to cart Available from Raab Collection
Share this item