Nixon, As Presidential Strategist, Justifies His Postal Reorganization as Not Pro-Union in a Letter to Ike's Conservative Brother 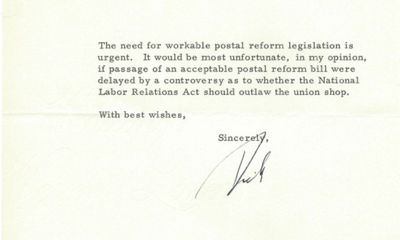 3/6/70. Richard Nixon In May 1969, four months after he became president, Richard Nixon asked Congress to pass a postal reform act calling for removal of the Postmaster General from the Cabinet and creation of a self-supporting postal corporation wholly owned by the federal government. No action was taken on the issue until March 1970 when there was an illegal postal workers strike called in response to the proposal and Nixon sent in troops and the National Guard to help deliver the mail. After the strike was settled in April, the administration introduced the Postal Reorganization Act of 1970 to abolish the United States Post Office Department and creat the United States Postal Service, a corporation-like independent agency with an official monopoly on the delivery of mail in the United States. Nixon signed the law on August 12, 1970.
In the months leading up to passage, there were many voices raised in opposition. From the left, union leaders feared that the new corporation would be more resistant to working with them to meet worker’s negotiating demands. From the right, critics worried that the new private corporation would have to recognize a postal labor union. This concern seemed to gain currency when the Postal Service was placed under the the Taft-Hartley Act, a law that greatly restricts the activities and power of labor unions but recognizes their rights to organize and strike. One of those most concerned about this was Edgar Eisenhower, brother of President Dwight D. Eisenhower and a very conservative Republican. He wrote Nixon with his concern that this was pro-union legislation, and Nixon was quick to try and assure him it was not. The Eisenhower and Nixon families had by then been united by the marriage of David Eisenhower and Julie Nixon, and the long-term acquaintenceship between Edgar and Nixon, and Edgar’s influence, were probably all factors in Nixon doing something quite unusual as president - personally answering correspondence in what are clearly his own words, complete with underlinings and a first-name signature. We do not recall seeing that before.Typed Letter Signed on White House letterhead, Washington, June 3, 1970, to Edgar Eisenhower. “...Let me assure you that the postal reform bill proposed by the Administration would not reqiure compulsory unionism. We have proposed, as one phase of a broad plan for dealing with the unique problems faced by the Post Office Department, that postal labor-management relations be governed by the same laws that apply in the private sector - including the Taft-Hartley and Landrum-Griffin Acts - except that strikes by postal employees would continue to be illiegal, and machinery would be provided to permit resolution of negotiating impasses without resort to strikes. It obviously is not feasible to use the postal reform legislation as a vehicle for reforming the Taft-Hartley Act. Accordingly, one consequence of putting the Postal Service under Taft-Hartley would be that postal management - like management in the private sector - might have to bargain over union shop arrangements in states other than those having right-to-work laws. (Whether the Postal Service would ever agree to a union shop arrangement is another question entirely.) Our guiding principle has been that the Postal Service should be reorganized in a way that would permit it to be managed as effectively as a well-run private business. This entails a resort to the terms of the Taft-Hartley Act, but it certainly does not entail a statutory imposition of compulsory unionism. The need for workable postal reform legislation is urgent. It would be most unfortunate, in my opinion, if passage of an acceptable postal reform bill were delayed by a controversy as to whether the National Labor Relations Act should outlaw the union shop.”This letter gives us a rare glimpse of Nixon as strategist during his presidency, weighing and balancing what to say and how to say it.  (Inventory #: 20269)
$3,000.00 add to cart Available from Raab Collection
Share this item