As Operation Torch Concludes, Ike Says He Is Well and “Going Strong” Amidst his welter of responsibilities, he insists he is putting in as much time corresponding to his family as he possibly can. 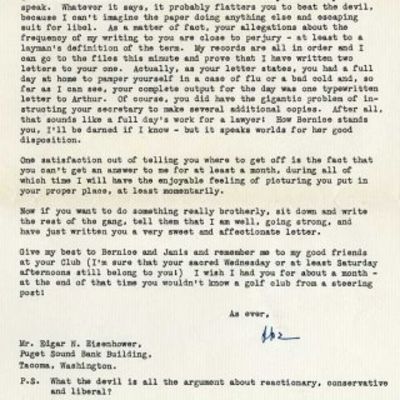 21/11/1942. Dwight D. Eisenhower Eisenhower’s wartime rise in the military was meteoric. He started World War II as Chief of War Plans and became Assistant Chief of Staff in charge of Operations for General George Marshall in April 1942. In that post, he conducted a mission to London to increase co-operation among World War II allies. On June 25, 1942, he was designated commanding general of all U.S. troops in the European Theater and was directly involved with planning and executing U.S. military strategy. In early November 1942, he was then given command of Operation Torch - the Allied landings in North Africa. These took place from November 8-11 and were successful. By mid-November the Allies were able to begin advancing into Tunisia to take on the Germans, but the Africa campaign did not swing into full force until early 1943. That summer Eisenhower led the invasions of Sicily and Italy, and in December 1943, after success in Italy, he was appointed Supreme Commander, Allied Expeditionary Forces. In this role he planned and commanded Operation Overlord - the invasion of Normandy - that took place on June 6, 1944 - D-Day.As usual, you are yelping about something and giving us all hell for no reason except that you seem to have a bad disposition and a day at home in which to indulge your proclivities toward sarcasmEdgar Eisenhower was a lawyer and Ike’s older brother. He graduated from the University of Michigan in 1914, a year before his brother finished at West Point, and began practicing law in 1915 in Tacoma, Washington. His relationship with his brother was both close and strained at the same time. On a personal level, Edgar was an older brother who was both opinionated and thought he knew best. He seldom hesitated to tell Ike what to do, even while his younger brother was President. On a political level, Edgar was known as an ultraconservative, while Ike was a moderate. They were thus often in disagreement and would have heated discussions about history and politics around the kitchen table when they got together. As busy as Ike was planning, executing and leading Operation Torch, the first American invasion of the war in the European Theater, and as burdened as he was with the responsibilities of that task (while the world waited with baited breath), Edgar was irritated that he hadn’t written him more often. He complained about Ike to their brother Arthur, who passed on word to Ike. This was “the bridge too far” for Ike, and as even-tempered as he was, he just could not remain silent. He sent Edgar the most negative letter he ever addressed to him, one so scathing that Edgar’s wife hid it away so that nobody else would see it.Typed Letter signed on his Office of the Commander-in-Chief letterhead, North Africa, November 21, 1942, to Edgar, fighting back and saying he is doing well under the weight of responsibilities. “Today I received a copy of the letter you wrote on November 6 to Arthur. As usual, you are yelping about something and giving us all hell for no reason except that you seem to have a bad disposition and a day at home in which to indulge your proclivities toward sarcasm. Legal training must be a terrible thing for souring a man’s outlook on life. I have no idea about the nature of the ‘Life’ story of which you speak. Whatever it says, it probably flatters you to beat the devil, because I can’t imagine the paper doing anything else and escaping suit for libel. As a matter of fact, your allegations about the frequency of my writing to you are close to perjury - at least to a layman’s definition of the term. My records are all in order and I can go to the files this minute and prove that I have written two letters to your one. Actually, as your letter states, you had a full day at home to pamper yourself in a case of flu or bad cold and, so far as I can see, your complete output for the day was one typewritten letter to Arthur. Of course, you didn’t have the gigantic problem of instructing your secretary to make several additional copies. After all, that sounds like a full day’s work for a lawyer! How Bernice stands you, I’ll be darned if I know -- but it speaks worlds for her good disposition. One satisfaction out of telling you where to get off is the fact that you cannot get an answer to me for at least a month, during all of which time I will have the enjoyable feeling of picturing you put in your proper place, at least momentarily. Now if you want to go do something really brotherly, sit down and write the rest of the gang, tell them that I am well, going strong, and have just written you a very sweet and affectionate letter...What the devil is all the argument about reactionary, conservative and liberal?”        (Inventory #: 3551)
$4,500.00 add to cart Available from Raab Collection
Share this item