In a Famous Letter, Reminiscent of Lincoln's 'Bixby Letter,' President Franklin D. Roosevelt Comforts a Family That Had Lost Three Sons Killed in a Battle Off Guadalcanal in November 1942 “There is little that I can say to lessen the burden of your grief…our country which owes to you and them a debt of undying gratitude. As Commander in Chief, I express to you a nation's sympathy.” 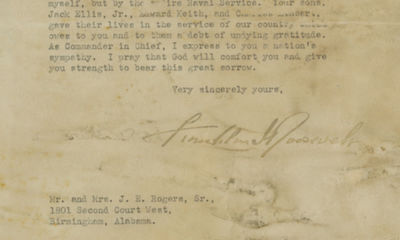 4/1/43. Franklin D. Roosevelt His words are readily reminiscent of those Abraham Lincoln wrote to Mrs. Bixby, who lost five sons in the Civil WarThe Rogers brothers’s deaths, and those of the Sullivan brothers, led to the adoption of a rule that no longer permitted family members to serve with each other in combat areasAmong the literary masterpieces of Abraham Lincoln, states William Springer in his work “Tributes to Abraham Lincoln”, are his melancholy Springfield Farewell Speech, his Second Inaugural Address, and the famous letter to Mrs. Lydia Bixby, a Boston widow who had lost five of her sons in the Civil War. The latter letter reads, “Executive Mansion, Nov. 21, 1864. Dear Madam: I have been shown in the files of the War Department a statement of the Adjutant-General of Massachusetts that you are the mother of five sons who have died gloriously on the field of battle. I feel how weak and fruitless must be any words of mine which should attempt to beguile you from the grief of a loss so overwhelming. But I cannot refrain from tendering to you the consolation that may be found in the thanks of the republic they died to save. I pray that our heavenly Father may assuage the anguish of your bereavement, and leave you only the cherished memory of the loved and lost, and the solemn pride that must be yours to have laid so costly a sacrifice upon the altar of freedom. Yours very sincerely and respectfully — Abraham Lincoln.”That was 1864. Now for 1942. Jack Ellis Rogers Jr., Charles Ethbert Rogers, and Edward Keith Rogers were killed in action aboard the USS New Orleans during the Battle of Tassafaronga off Guadalcanal in the Solomon Islands on November 30, 1942. In that battle, one American ship was sunk, three badly damaged, and almost 400 men killed. The news reached President Roosevelt soon after, and he determined to put aside his duties of the day to reach out to the Rogers family to express his personal condolences, as Lincoln had to Mrs. Bixby.This is the now famous letter FDR wrote the Rogers boys’ parents. Typed Letter Signed, on White House letterhead, Washington, January 4, 1943, to Mr. and Mrs. J. E. Rogers. ""I have just been advised of your loss of three sons who gave their lives in the performance of their duty in action against the enemy. There is little that I can say to lessen the burden of your grief. However, I want you to know that your great sorrow is shared not only by myself, but by the entire Naval Service. Your sons, Jack Ellis, Jr., Edward Keith, and Charles Ethbert, gave their lives in the service of our country which owes to you and them a debt of undying gratitude. As Commander in Chief, I express to you a nation''s sympathy. I pray that God will comfort you and give you strength to bear this great sorrow. Very sincerely yours — Franklin D. Roosevelt.” Though time has led to some loss of text, since the letter is well known and published, the full text is readily available.Springer rightly sees a comparison between the two letters, as that comparison readily came to our minds even prior to seeing his book. Springer praises Lincoln’s masterful language, then says, “…both letters are great in their own way, and that never before nor since Lincoln's time, has anyone been able to emulate his extraordinary literary ability. As a matter of fact, Rogers letter in some respects seems to bear considerable likeness to the Bixby letter.”This letter of Roosevelt, and the one he wrote to the Sullivan family whose five sons were killed when their ship sent down, also in the Guadalcanal campaign, are the two great servicemen’s condolence letters FDR wrote during World War II. It is privilege to carry this one.The Navy named the destroyer the USS Rogers (DD-876) after the three Rogers brothers. If was launched in 1945, served during World War II, and was decommissioned in 1980. The Navy named two destroyers after the Sullivans to honor those brothers: The USS The Sullivans (DD-537) and USS The Sullivans (DDG-68). DD-537 was the first American Navy ship ever named in plural after more than one person. Wikipedia states that the deaths of both the Sullivan and Rogers brothers led to the adoption of a rule that no longer permitted family members to serve with each other in combat areas. (Inventory #: 19407)
$18,500.00 add to cart Available from Raab Collection
Share this item