A Signed Copy of Mark Twain’s Beloved The Prince and the Pauper It is uncommon to find a signed copy of one of Twain’s great novels. 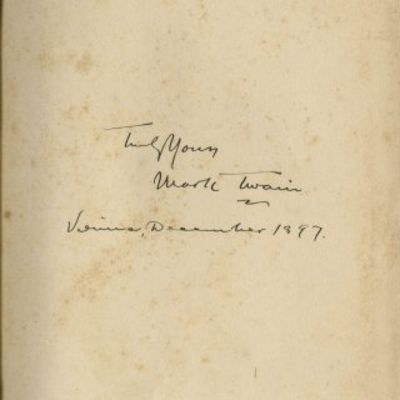 12/1897. Mark Twain Mark Twain’s The Prince and the Pauper tells the tale of two boys, one Edward Tudor, son of Henry VIII, the long-awaited male heir to the throne of England, and the other Tom Canty, the unloved son of a beggar and thief. Coincidentally, Canty and Edward were born in London on the same day and resemble each other. The boys trade clothing one afternoon and, as a result, they trade lives as well. After many adventures, matters are set right again, with one of the boys resuming his rightful, royal position and the other boy accepting a position that recognizes his innate intelligence and good heartedness. The book enjoyed enormous popularity after it came out, and continues to be popular and in print today.Twain and his family began their sojourn to Vienna on September 28, 1897.  They would not depart from Austria until May 1899. Twain found himself appreciative of the way of life of the Viennese, albeit with one or the other bushy eyebrow raised to accommodate their many paradoxes. And his presence in Vienna was certainly appreciated by the Viennese. Bookstores sold out their stocks of his books even before his arrival. Viennese newspaper reporters wrote innumerable articles referring to him with affection or, in some cases, disparagement as ""Our Famous Guest"".During his stay, Twain continued writing stories, essays, and articles. He met and mingled comfortably with many if not most of the prominent Viennese figures of the day, not only journalists, writers, and politicians, but those in the arts, medicine, science, and business as well. Twain's appetite for people was always enormous. He was friendly with Baroness Bertha Kinsky von Suttner, founder of the Austrian Society of Friends of Peace who was awarded the Nobel Peace Prize in 1905, and met Sigmund Freud, who was 42 years old at the time.This is a copy of “The Prince and the Pauper”, signed during his stay in Vienna. It is a hardcover edition published by Chatto & Windus of London, 1897, with navy blue cloth covers with gold titles to spine and front cover, and 190 illustrations throughout text. It is signed “Truly yours, Mark Twain, Vienna, December 1897.Mark Twain signed books are increasingly uncommon. (Inventory #: 8718)
$12,000.00 add to cart Available from Raab Collection
Share this item