War Date Signed Free Frank of Gen. George Washington to Gen. John Glover, the Man Who Rowed Him Across the Delaware Docketed by Glover with Washington’s name and the date - July 28, 1780 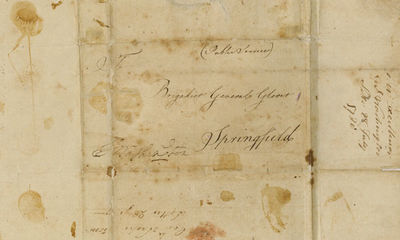 28/07/1780. George Washington Uncommon to find both men’s handwriting on one pieceAt the start of 1776, John Glover and his experienced Marblehead seamen became the 14th Continental Army Regiment and in July joined George Washington and the bulk of his forces on Long Island. In a series of maneuvers, British General Sir William Howe outflanked the Americans driving them back against the East River until they were nearly surrounded. Their only hope was to somehow escape across the river to Manhattan. During the night of August 29, Glover and his Marbleheaders ferried 9,000 Continental troops and all of their equipment, guns, horses, and cannon, at night and under adverse weather conditions. More defeats compelled the Americans to flee across New Jersey into Pennsylvania, with the British in pursuit. However, when Howe was unable to get across the Delaware River, he closed his campaign for the year and marched back to winter quarters in New York City. To occupy the conquered colony of New Jersey, the British general left behind a chain of individual garrisons, the principle one of which was at Trenton. Washington grasped quickly the flaw in the British strategy: by establishing separate posts along the river, the British forces were divided and lay wide open to raids. He determined upon a daring plan to cross the Delaware on Christmas night, dash down to Trenton and smash the Hessian garrison stationed there.But could Washington’s army and weaponry navigate the ice-strewn Delaware River to reach the opposite bank? The answer again depended on John Glover, whose knowledge and experience of maritime matters made him a master of amphibious operations. Washington came to look upon Glover’s men as a kind of ferrying unit ever since the regiment had proven instrumental in evacuating the American army from the precarious position on Long Island. When the attack on Trenton first had been discussed, tradition avers that Washington turned to Glover to ask if his mariners could navigate the icy river. Glover murmured quietly that his boys could manage the task. Only after this assurance, it is said, did Washington proceed with his plan.As dusk fell early on that bleak December afternoon, the boats that Washington had collected and concealed from enemy view were taken down to the riverbank. Built for river commerce, they were ideally suited for military operations because of their large size and light draft. _Then the 2,400 men in Washington’s force were brought to the boats. Christmas night brought with it a howling storm; a wind roared down, churning the river waters and making difficult the handling of the pitching craft. The river was high and the swift and surging current was littered with ice. As the night turned colder and the wind more piercing, new ice formed on the gear. The Delaware at the ferrying place was only about 1,000 feet wide, yet Glover’s soldiers were forced to call upon all of their seaman’s skill to navigate this span. Great chunks of ice came surging downstream to hit against the boats and became obstacles impeding the forward progress of the craft. Each cake of ice had to be wrestled out of the way before the boats could continue their passage. Yet they worked away and the patriot force on the east side of the Delaware gradually swelled in size. Ferrying the heavy howitzers and guns became the most critical part of the operation. With much effort, Glover’s men succeeded. After the crossing came the surprise victory at Trenton, which reinvigorated the American cause at its lowest point and quite likely saved the Revolution. The tale of Washington crossing the Delaware passed into legend as well as history, and became the subject of probably the best known American historical painting.Glover left the army at the end of 1776 in order to put his personal affairs back in order, but Washington wrote him a personal letter asking that he resume a command, which he did in mid-1777. He commanded a brigade in the Saratoga campaign under General Horatio Gates, and the following year went to Rhode Island to participate in a combined American-French attack on the British at Newport. He remained for a time in Providence as commander of the American forces, then was posted to the Hudson River highlands where he served with units assigned to watch the British in New York City and, if necessary, to block their movement up the river. He remained there until 1782.On July 28, 1780, Washington wrote Glover, saying: “I have recd yours of the 19th and am pleased to hear that the Recruits from the State of Massachusetts are in general so good. You certainly took the proper steps with those few deemed unfit for the service. Inclosed is a letter for General Stark who I suppose will have arrived at Springfield before this reaches you, but should he not, and the troops from New Hampshire be still there waiting for him; you will be pleased to order them as expeditiously as possible to Claverac [PA]…”This is the free frank from that letter, the entire panel being present. The balance of the frank is in the hand of Washington’s aide, Tench Tilghman. The docket is in the hand of General Glover himself.This is a fascinating and very uncommon association piece, with the handwritings of both Washington and Glover on one piece. (Inventory #: 16893)
$15,500.00 add to cart Available from Raab Collection
Share this item