Robert E. Lee, as President of Washington College, Signs a Report Card for One of His Best Students, Who Would Become a College Professor 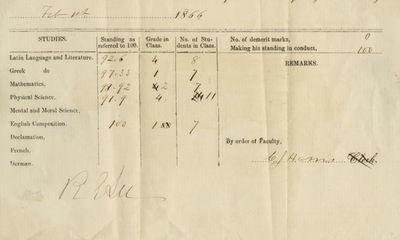 01/02/1866. Robert E. Lee Lee is one of the United States’ most well-respected military leaders, but he was also a dedicated educator who, in August 1865, only four months after the end of the Civil War, became president of Washington College in Virginia. The world of higher learning gave him what he wanted and needed - a role in rebuilding the South and creating competently trained professionals. By stressing the classics such as Latin and Greek (as well as writing and the sciences) to students such as R.C. Morrison, Lee felt he could achieve this goal. Within his first three years, he was on his way to rebuilding the South through higher learning. He tripled the school’s faculty, grew the student body from 50 to 400 members, and bolstered its financial situation through fundraising.Document signed, as President of Washington College, Lexington, Va., February 1, 1866, being a report card for student R.C. Morrison. Morrison received grades and class standings in five courses, including Latin, Greek, Physical Science, Mathematics, and English Composition, in all of which he ranked in the top 10% in his class. Morrison went on to serve as Washington College’s Assistant Professor of Modern Languages. In 1870 he became full Professor of Latin and Greek at Oakland College in Mississippi, and spent his entire career in academia. As for Lee, when he died the college was renamed Washington and Lee College, the name, as Washington and Lee University, it retains to this day. Robert E. Lee, starting with 50 students, would today see over 4,000 matriculating there. (Inventory #: 18976)
$5,500.00 add to cart Available from Raab Collection
Share this item