King George IV Orders That the German Duchy of Saxe-Coburg-Gotha Be Included in the Treaty of Aix-la-Chapelle, Which Ended Allied Occupation of France After the Napoleonic Wars The Crown of Great Britain was allied by marriage with the Duchy; George’s daughter Charlotte was married to the Duke’s son Prince Leopold, and George’s brother Prince Edward was married to the Duke’s daughter Mary. 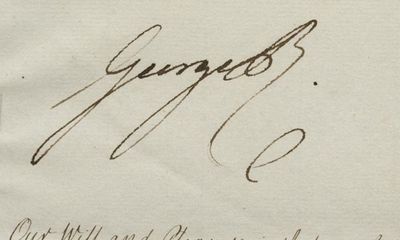 31/12/1820. George IV France had agreed in the treaty to make a major cash payment to the allies, and likely George was looking out for the interests of the Duchy, which had aided the allies in the Napoleonic WarsFrom October 1–November 15, 1818, a congress was held by the allies that had defeated Napoleon - Great Britain, Austria, Prussia, and Russia - but with former foe France, now under the royal rule of King Louis XVIII, also included, to discuss and take common action on European problems following the Napoleonic Wars. This congress, held at Aix-la-Chapelle, was attended by Tsar Alexander I of Russia, Emperor Franz II and Prince Metternich of Austria, King Frederick William III of Prussia, the Duke of Wellington and Lord Castlereagh of Great Britain, and by the Duke of Richelieu for France. The allies still had an army of occupation in France, which the French saw as both an infringement on their sovereignty and a sign that they could not be trusted. So at the start Richelieu offered to pay most of the war indemnity owed by France to the allies in return for the withdrawal of their armies of occupation by November 30. This offer was accepted. On October 9 a treaty was signed settling the claims against France as a result of the wars. France was then admitted to the new Quintuple Alliance as an equal.The Duchy of Saxe-Coburg-Saalfeld ((later known as Saxe-Coburg-Gotha) in what is now Germany provided material assistance to the Allies in their wars against Napoleonic France. In 1816 the Duke was rewarded for this, not in cash which the allied had little of at that moment, but by receiving the right to add the Principality of Lichtenberg to his territories. Chances are that with France providing hard money pursuant to the Treaty of Aix-la-Chapelle, the Duchy was slated to receive some monetary compensation as well. The British would have been the primary movers to involve Saxe-Coburg-Saalfeld in the Treaty’s benefits, as the Crown of Great Britain was allied by marriage with the Duchy. In 1816 King George IV’s daughter had married the Duke’s son Leopold, and in May 1818, five months before the treaty signing, George’s brother Prince Edward, Duke of Kent, 4th son of George III, married Leopold’s sister, Princess Mary Victoria of Saxe-Coburg-Saalfeld. In fact, the Duchy receiving Aix-la-Chapelle funds may have been an unwritten part of the latter marriage agreement. Prince Edward and Princess Mary Victoria became the parents of the future Queen Victoria in 1819, just one year later. Interestingly, Mary Victoria’s other brother Ernst had a son Prince Albert, who in 1840 married his first cousin, the future Queen Victoria.Document signed, Carlton House Palace, December 31, 1820, being his order to make the Duchy of Saxe-Coburg-Saalfeld a party to the Treaty of Aix-la-Chapelle. “Our will and pleasure is that you forthwith cause the Great Seal of Our United Kingdom of Great Britain and Ireland to be affixed to an instrument bearing date with these presents…containing Our acceptance of an Act of Accession on the part of Our Good Cousin the reigning Duke of Saxe-Coburg-Saalfeld, to a Convention concluded at Aix-la-Chapelle on the ninth day of October 1818, for the evacuation of French Territory by the Allied troops. And for so doing this shall be your warrant.” (Inventory #: 9882)
$3,500.00 add to cart Available from Raab Collection
Share this item