Ernest Hemingway: ?All the brave aren?t dead but will be in 100 years? In a book protesting the treatment of the Spanish under dictator Franco, he writes a powerful inscription on bravery and mankind 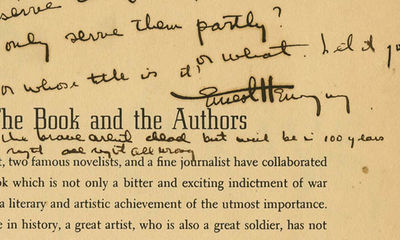 1939. Ernest Hemingway The Spanish Civil War took place from 1936 to 1939 and was fought between the Republicans, who were loyal to the democratic, left-leaning and relatively urban Second Spanish Republic, versus the Nationalists, a largely aristocratic, military, conservative group led by General Francisco Franco.In 1937, Hemingway agreed to report on the Spanish Civil War for the North American Newspaper Alliance (NANA), arriving in Spain in March with Dutch filmmaker Joris Ivens.Ê Late in 1937, while in Madrid with future wife Martha Gellhorn, Hemingway wrote his only play, The Fifth Column, as the city was being bombarded. He returned to Key West for a few months, then went back to Spain twice in 1938, where he was present at the Battle of the Ebro, the last Republican stand, and he was among the British and American journalists who were some of the last to leave the battle as they crossed the river.HemingwayÕs anger over the atrocities of the war and his moral sympathy for the cause of the Republicans manifested itself in a 1939 work done in collaboration with other artists and writers, entitled ÒAll the Brave.ÓÒAll the Brave: Drawings of the Spanish Civil War by Luis Quintanilla,Ó with a preface by Hemingway, published in New York by Modern Age Books, 1939, pp. 29 of text and illustrations, profusely illustrated, with 4 original lithographs.Ê This copy is signed by Hemingway with an inscription, first musing on the merits of the title and the entitlements of the brave, and ending with a statement on the bravery of man. ÒAll the brave (only the brave) (deserve the fair?) or only serve them partly? Or whose title is it, or what.Ê Let it go.Ê All the brave arenÕt dead but will be in 100 years, all right all right all wrong.Ó (Inventory #: 14849)
$12,000.00 add to cart Available from Raab Collection
Share this item