Theodore Roosevelt on His Mediation of the Russo-Japanese War, For Which He Received the Nobel Peace Prize Just days after negotiations ended, he states his own satisfaction with the peace treaty, and reveals that he carefully prepared for his role, willingly took risks, and had a game plan for the negotiations 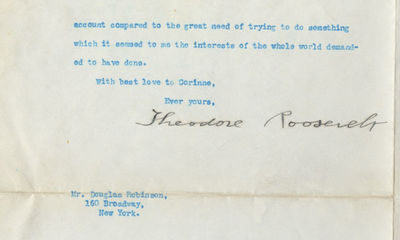 31/08/1905. Theodore Roosevelt Acquired by us from the Theodore Roosevelt AssociationWar broke out in 1904 between Russia and Japan because the Russian and Japanese empires both wanted greater influence in Asia. Fighting began when the Japanese fired on the Russians at Port Arthur in Manchuria. The Japanese maintained the military upper hand throughout the conflict, but Russia, despite being riven by civil strife, continued the fight. Lacking financial means to continue the war, Japan asked President Theodore Roosevelt to mediate a peace. Both sides accepted.Roosevelt invited Russia’s Count Sergei Witte and Japan’s Baron Jutar_ Komura to Sagamore Hill to begin the personalized diplomacy that he favored. Once they arrived with their delegations, the negotiators then went to the Portsmouth Naval Shipyard in Maine and finally on to the presidential yacht, the Mayflower. Talks lasted from August 6 to August 30, 1905, and the Treaty of Portsmouth was signed a week later on September 5, which officially concluded the Russo-Japanese War. The results were, thanks in part to Roosevelt’s adroit negotiating, that both sides agreed Russia would give up any rights to Port Arthur and to the southern half of Sakhalin Island, but would not pay indemnities to Japan, and that Japan could exercise control over Korea. Russia and Japan promised to evacuate Manchuria. Roosevelt’s goal was to create a balance of power between the two empires, and he succeeded, at least for the immediate future. TR’s efforts also elevated the United States to a position of greater authority and high visibility in world affairs, and won him the 1906 Nobel Peace Prize. He was the first U.S. president to garner this prestigious award. Roosevelt was heaped with praise, at home and abroad.Typed letter signed, on White House letterhead, Washington, August 31, 1905, the day after the negotiations concluded and five days before the treaty was signed, to his friend and brother-in-law, Douglas Robinson. In it, TR reveals that he carefully prepared for his role, says frankly that he willingly took risks, makes clear that he had a game plan for the negotiations, and tells of his own satisfaction with the peace treaty. And though thankful for the honors, he confided that he doubted the sincerity of many of the congratulations.“That was an awfully nice letter of yours, old fellow, and I deeply thank you for it. But don’t be misled by the fact that just at the moment men are speaking well of me. They will speak ill soon enough. As Mr. Loeb remarked to me to-day, sometime soon I shall have to spank some little brigand of a South American Republic, and then all the well-meaning idiots will turn and shriek that this is inconsistent with what I did with the Peace Conference, whereas it will be exactly in line with it in reality.“Of course I am very much pleased at the outcome. I tried as far as it was humanly possible to get the chances my way, and looked the ground over very carefully before I took action. Nevertheless I was taking big chances and I knew it, and I am very glad things came out as they did. I can honestly say, however, that my personal feelings in the matter have seemed to be of very, very small account compared to the great need of trying to do something which it seemed to me the interests of the whole world demanded to be done."" Roosevelt mentions this very letter in his autobiography, and his statement “Don’t be misled by the fact that just at the moment men are speaking well of me. They will speak ill soon enough” is a well-known one.This is essentially a family letter - from TR to his brother-in-law. Provenance: acquired by Raab from the Theodore Roosevelt Association. (Inventory #: 18521)
$20,000.00 add to cart Available from Raab Collection
Share this item