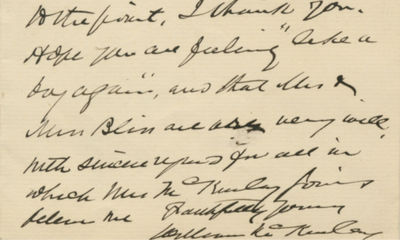 by William McKinley
11/06/1899. A very uncommon ALS of McKinley as PresidentCornelius N. Bliss was a partner in one of the largest wholesale dry-goods firms in the country. He was also chairman of the Republican committee in New York in 1887 and 1888, and contributed much to the success of the Benjamin Harrison ticket in his state in the 1888 election. He served as treasurer of the Republican National Committee from 1892 to 1904. He turned down the offer of becoming Secretary of the Treasury under President McKinley, but accepted the post of Secretary of the Interior, maintaining that position until February 1899. While in office, Bliss focused on forestry and Indian affairs. Offered by McKinley the vice presidential slot in his 1900 reelection campaign, he declined, so the nod went instead to Theodore Roosevelt. In 1904, Bliss was Roosevelt’s campaign manager.On May 29, 1899, President McKinley issued an executive order exempting between 3,000 to 4,000 positions from competitive civil service examinations. McKinley’s order seemed to mark a retreat from President Grover Cleveland’s more aggressive promotion of civil service reform. McKinley was severely criticized for taking these places out of the civil service, though most of them were first included in civil service by President Cleveland's blanket order at the close of his last administration just a few years earlier. McKinley’s defense was that it was well understood at the time President Cleveland issued his order that it was experimental, and that his successor would have to make exceptions. McKinley, it was said, refused to yield many exceptions that he was urged by his party’s leaders to grant.Soon after, Bliss, now out of office, gave an interview to the “Mail & Express” newspaper, and insisted that McKinley was a proponent of civil service and had acted appropriately. The magazine “The American Economist”, in its July 21, 1899 issue, opined that based on Bliss’s interview, “The conclusion that in President McKinley's order of civil service exemptions there has been no backward step, no letting down of the bars for the easier entrance of the spoilsmen…” This was of enormous help taking the heat off of McKinley.McKinley wrote Bliss. Autograph letter signed, as President, on Executive Mansion letterhead, Washington, June 11, 1899, to Bliss, expressing his appreciation. “I have just read your admirable interview published in the Mail & Express. What you have said is most truly and to the point. I thank you. Hope you are feeling ‘like a boy again’, and that Mrs. & Miss Bliss are very well. With sincere regard for all, in which Mrs. McKinley joins, believe me, Faithfully yours, William McKinley.”ALSs of McKinley as President are uncommon. We obtained this from the Bliss descendants, and it has never before been offered for sale. (Inventory #: 19721)
$4,000.00 add to cart Available from Raab Collection
Share this item