New Commanding General of the Army William T. Sherman Acknowledges that in the Army Reorganization, “J.J. Reynolds, Ames, and others of our best officers were left out” But he will appeal to Congress, as there are “good reasons for keeping in service more officers that the regimental standard requires.” 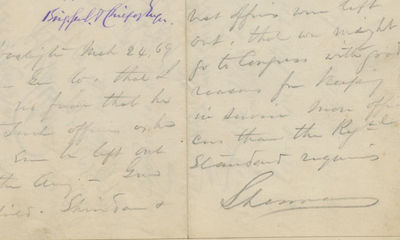 24/03/1869. William T. Sherman After the Civil War, the huge military apparatus that had been built to effectuate the war had to be pared down. This process was begun soon after the war, in 1866, with the Army Reorganization Act, and then again on March 4, 1869, when the Army was further constricted from 45 to 25 regiments. This had the effect of not only thinning the population of rank and file soldiers but also of their commanders, many of who had distinguished themselves during the Civil War and now found their service unrewarded or found themselves placed in odd posts around the country. Interestingly, the date of the Act was also the day that Ulysses S. Grant was sworn in as President.James Harrison Wilson, who ended the war as a Major General in the Union Army, was one such person. He had served as an aide to McClellan during the Maryland Campaign before joining Grant's army in the Western Theater, where he was promoted to brigadier general. In 1864, he transferred from engineering to the cavalry, where he displayed notable leadership in many engagements of the Overland Campaign. In October 1864, Wilson was upgraded to brevet major general of volunteers and transferred back to the West to become chief of cavalry for the Military Division of the Mississippi under Gen. William T. Sherman. Wilson soon became one of the few Union commanders to defeat Confederate cavalier Nathan Bedford Forrest in battle - at the Battle of Franklin in November 1864, and again during his raid through Alabama and Georgia in March and April 1865. Wilson ended the war with his men capturing both Confederate President Jefferson Davis and Andersonville Prison commandant Henry Wirz in May 1865.In 1869, he found himself outside regular command, and appealed to Major General A. A. Humphreys, who after serving as Meade’s Chief of Staff during the war, had been rewarded with the post of Chief Engineer of the U.S. Army. Humphreys, in endorsing it, sent it along to General Sherman, who, just days earlier, when Grant assumed the Presidency, had become Commanding General of the Army, the army’s senior position.Autograph letter signed of Wilson, on letterhead of the Des Moines and Rock Island Improvement letterhead, Keokuk, Iowa, March 19, 1869, to Humphreys. “I am somewhat uneasy about my status in the army reorganization and hope that my being on detached duty will not be allowed to mitigate against my interests. As a matter of course, I am ready to join my regiment or to go wherever I may be ordered, notwithstanding the pride I feel in the character and progress of the improvements with which I have been charged. It is my duty to say too that these improvements are now so fully developed in their character that any intelligent and faithful officer can conduct them to completion. In other words, I can be relieved from duty in connection with them without material detriment to them. Particularly if they are to be delayed for the want of necessary appropriations for their protection. In making this statement, my object is simply to inform you of my views, and knowing which you will be able to take such action in the premises as circumstances may require. As a matter of cause I have no favor to ask of the War Department in carrying out the laws, in the matter of army reduction, nor do I desire to have my friends interest themselves in any way in my behalf, as I hold that an officer’s services should be his sole advocate for consideration. I am perfectly willing to take my lot whatever it may be, if it comes in accordance with that rule.”Humphreys sympathized, and in an Autograph endorsement signed, March 23, 1869, sent it on to Sherman. “Respectfully submitted to the General of the Army. Although this letter cannot be considered official, yet as it might prove to be an injustice to General Wilson if the contents were made known to the General of the Army, I have concluded to submit it.”Sherman knew Wilson from their wartime association. Autograph endorsement signed, March 24, 1869. “Answer to W[ilson] that I have no fear that he and such officers as he will be left out in the army. Generals Schofield, Sheridan, and the President all examined [the list of] officers retained in the active regiments and thought the only safe rule was to put to these regiments those 'present for immediate service' - J.J. Reynolds, [Adelbert] Ames, and others of our best officers were left out, that we might go to Congress with good reasons for keeping in service more officers that the regimental standard requires.” Signed “Sherman.” Some loss to text affects 3-4 words.So Sherman tells Wilson that the initial list of officers to be retained was keep lean on purpose, so that the army could then ask Congress to remedy the situation by allocating more funds for senior officers. But in the end any improvement did not help Wilson, whose duty assignments continued to be in the Corps of Engineers. He resigned from the army in December 1870, but returned to the army for the Spanish-American War and the Boxer Rebellion in China. He died in 1925, with only three Union Civil War generals living longer. (Inventory #: 17478)
$2,500.00 add to cart Available from Raab Collection
Share this item