President John F. Kennedy?s Letter to an Admiring 5-Year-Old Girl She had saved 2 cents to visit the President, and he brightened up her day: ?I am sending you this little note to surprise you and to say ?hello???. 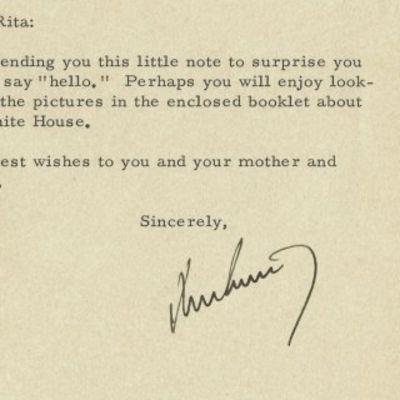 29/03/1962. John F. Kennedy  John F. Kennedy led the nation for little more than a thousand days, yet his presidency is intensely remembered, and not merely as a byproduct of his tragic fate. He steered the nation away from the brink of nuclear war, initiated the first nuclear test ban treaty, created the Peace Corps, and launched America on its mission to the moon and beyond. JFK inspired a nation, particularly the young, injecting hope and revitalizing faith in the American project. His published correspondence shows that, as president, Kennedy wrote to a number of school children, in letters revealing both heart and humor.This was because Kennedy loved children and cared about them. He is known for having said in a message to UNICEF, ""Children are the world's most valuable resource and its best hope for the future.""Ê And shortly before his death, he remarked that it was important to pay attention to the needs of children, stating ""We can say with some assurance that, although children may be the victims of fate, they will not be the victims of our neglect.""Not long ago, the Kennedy Library released a letter Kennedy wrote an 8-year-old late October 1961 in response to her fear that Santa Claus would be killed by Russians conducting nuclear bomb testing at the North Pole. ÒYou must not worry about Santa Claus,Ó JFK wrote. ÒI talked with him yesterday and he is fine. He will be making his rounds again this Christmas.ÓIn early 1962, 5-year-old Rita Lynn Knights went off to Sunday School with 7 cents to put in the collection box. When she got home, her mother saw that she still had two pennies. These had been kept, Rita told her mother, so ÒI can go to the Big House to see Jack Kennedy.Ó When her father, a Louisville bus driver, came home, she gave him the two cents and asked him for a bus ticket to Washington. Her father wrote JFK about the incident, and the President was touched. He took time out of his day to respond to her personally, in a letter with humor and very much in his voice.This incident was covered by the media at the time.Ê They were drawn in by the personal interest story of KennedyÕs interest in this small child, who so admired him.Ê This is his original letter.Typed letter signed, on White House letterhead, Washington, March 29, 1962, to Rita. ÒI am sending you this little note to surprise you and to say ÔhelloÕ Perhaps you will enjoy looking at the pictures in the enclosed booklet about the White House. Best wishes to you and your mother and fatherÉÓ The booklet is no longer present.This is our first letter from JFK to a little child, and we do not recall ever having seen any others offered for sale. A search of public sale records going back 40 years shows no letters from JFK to a child having reached that marketplace either. Letters from Presidents to children are particularly uncommon, and show a personal and evocative side of that figure. (Inventory #: 9885)
$11,000.00 add to cart Available from Raab Collection
Share this item