Incredibly Rare Document Signed by Francois II, the Boy King of France, During His One Year Reign as Monarch He allows a woman to take guardianship of her children and lands after the death of her husband. 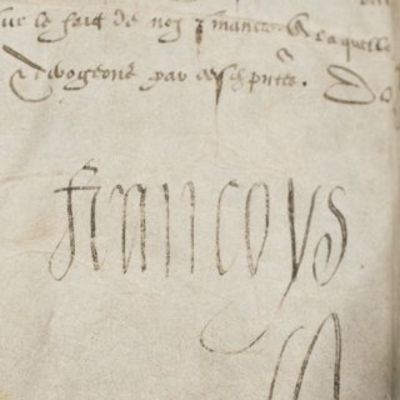 28/02/1560. Francois II One of only four documents of Francois to reach the public market in decades and the only one in the past decadeFrancis II was a monarch of the House of Valois-Angoulême and King of France for a little over one year, from 1559 to 1560. He was also King consort of Scotland as a result of his marriage to Mary, Queen of Scots, from 1558 until his death.  He ascended the throne of France at the age of fourteen after the accidental death of his father, Henry II, in 1559. His mother was Catherine de Medici.  His short reign was dominated by the first stirrings of the French Wars of Religion and the loss of French possessions in Corsica, Tuscany, Savoy, and almost all of Piedmont under the Treaty of Cateau-Cambrésis.The health of the King deteriorated in November 1560. On 16 November he suffered a syncope. After only 17 months on the throne, Francis II died in December 1560.Nicolas de Manneville was a senior lord in northwest France, president of the regional chamber, and an advisor to the King.  He died in early 1560.Document Signed, ""Francoys,"" February 28, 1560, an order to the officials of the Chamber of Accounts in Paris, Treasurer of France at Rouen, Bailiff of Caulx and others, stating that he has granted to Marguerite Cauchon, widow of Nicolas de Maneville, wardship of her children, land and possessions, but reserving himself patronage.  Also signed by Laubespine, the Cardinal of Lorraine.  Attached to it is another vellum document, describing Nicolas as a Counselor to the King or “Conseiller du Roi.” (Inventory #: 9813)
$10,000.00 add to cart Available from Raab Collection
Share this item