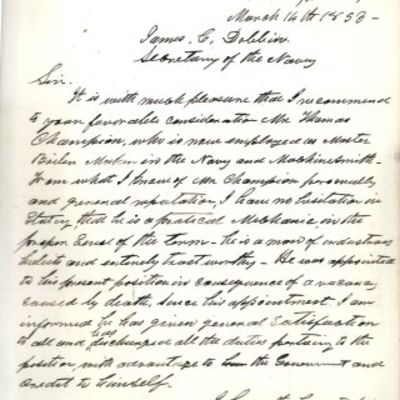 by Andrew Johnson
14/03/1853. Andrew Johnson started out in the humbler walks of life. Known in his time as the "courageous commoner," he was a tailor's apprentice, then followed the ideals inherent in the American dream to rise from his poverty-stricken circumstances. On his journey to the Executive Mansion, this self-taught man held nearly every political office available - including governor, senator, congressman and vice president - without having attended a single day of school.Johnson understood and was empathetic towards those who earned a living with their hands, and we see here was not too proud in his exalted status to be above helping others improve themselves.Autograph letter signed, as U.S. Congressman from Tennessee, Washington, March 14, 1853, to James C. Dobbin, Secretary of the Navy. "It is with much pleasure that I recommend to your favorable consideration Mr. Thomas Champion, who is employed as Master Boiler Maker in the Navy and Machinesmith. From what I know of Mr. Champion personally and general reputation, I have no hesitancy in stating that he is a practical mechanic in the proper sense of the term. He is a man of industrious habits and entirely trustworthy. He was appointed to his present position in consequence of a vacancy caused by death. Since his appointment I am informed he has given general satisfaction to all and has discharged all the duties pertaining to the position with advantage to the Government and credit to himself." (Inventory #: 7863)
$3,000.00 add to cart Available from Raab Collection
Share this item