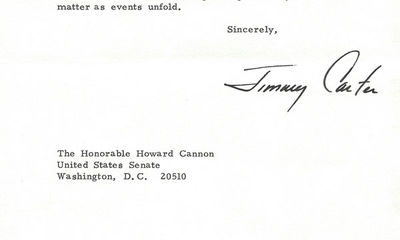 by Jimmy Carter
14/11/1977. In 1963 John F. Kennedy had achieved a limited nuclear test ban treaty, banning testing in the atmosphere, in space, and underwater. In the years that followed, there was a clamor to negotiate a comprehensive one that would cover underground testing. During the Nixon years the idea of a comprehensive nuclear test ban was proposed but met strong opposition at the Pentagon, where senior officials insisted that testing was a national security imperative. Nixon, however, found it necessary to accept a threshold Test Ban Treaty, a ceiling on the size of underground tests, because of Moscow's continued insistence on a comprehensive ban.During his run for the presidency in 1976, Jimmy Carter made the non-proliferation of nuclear, chemical, biological, and conventional arms a key part of his foreign policy platform. Carter, in a departure from former Presidents Nixon and Gerald Ford, also tried to link his arms control ideas to his emphasis on human rights. After his January 1977 inauguration, Carter immediately began to pursue his counter-proliferation objectives. He determined to focus on anti-satellite space systems, chemical and biological weapons, and a comprehensive nuclear testing ban, even if such tests were used for peaceful purposes. The test ban discussions with the Soviet Union were the most intense and long-lasting arms control discussions of the Carter years, bogging down over whether so-called peaceful nuclear explosions should be included in an agreement. Carter wanted a comprehensive ban, but the Soviets wanted the ability to perform the peaceful explosions. Meanwhile, the U.S. military was unenthusiastic about the whole thing.The U.S. test site was in Nevada. In light of Carter’s intentions to proceed, and his statement that he would aggressively seek a ban on all nuclear weapons tests ""instantly and completely,” a number of Nevada political leaders were concerned about how a nuclear test ban would affect Nevada's economy and the nation’s safety. Nevada Senator Howard Cannon wrote to the President expressing his concerns, and received in return this letter, both determined and conciliatory at the same time.Typed letter signed, on White House letterhead, Washington, November 14, 1977, to Cannon, promising to assist Nevada to achieve healthy economy, even while maintaining that a test ban would be good for world peace. “I want to thank you for your letter of October 7, 1977 in which you expressed your concern that an early suspension of nuclear testing at the Nevada Test Site might have an adverse impact on world stability in general, and on Nevada's economy in particular. With regard to the former, while I believe we should move as rapidly as possible toward a suspension of testing, I assure you that no precipitous action will be taken that would in any way jeopardize the security of the United States.“With regard to the potential impact on the economy of Southern Nevada, I want you to know that very substantial thought and effort are being given to this question at the present time, to include development of a comprehensive safeguards plan which will consider how all US nuclear weapons-related facilities should be utilized under a comprehensive test ban treaty. There appears to be a number of ways in which the Nevada Test Site, its facilities, and its skilled staff and work force could be effectively utilized under such a treaty. Foremost among these, at least initially, would be the requirement to maintain readiness to resume nuclear testing should this be necessary. In addition, the Nevada facilities could be useful in carrying out non-nuclear testing (and related activities) in order to maintain both our nuclear weapons design capability and the reliability of our nuclear weapons stockpile. I also intend to ask Secretary Schlesinger to consider how the extensive capabilities and well established managerial and technical skills at the Test Site could be utilized in other activities of national interest such as the nuclear waste storage program.“I assure you and the people of Nevada, especially those associated with the Nevada Test Site, that I am personally aware of - and share - the concerns you have expressed. It is my intention that everything possible be done to utilize the personnel and the facilities at the Site to the fullest extent feasible subsequent to any nuclear test cessation. I would welcome a continuing dialogue with you on this matter as events unfold.” We acquired this letter directly from the Cannon descendants, and it has never before been offered for sale.In the end, Carter could not realize his goal of an end to testing. The Pentagon's opposition remained, and U.S.-Soviet relations soured after Moscow's invasion of Afghanistan. Agreements to end nuclear testing came later, and the last U.S. underground nuclear was carried out in 1992. (Inventory #: 14516)
$2,000.00 add to cart Available from Raab Collection
Share this item