President John Quincy Adams Looks to Close the Estate of His Revered Father, John Adams The bequests put into effect and all work done, he, as Executor for his father’s estate, pays his fellow Executor, Josiah Quincy, the fees due him for acting in that capacity 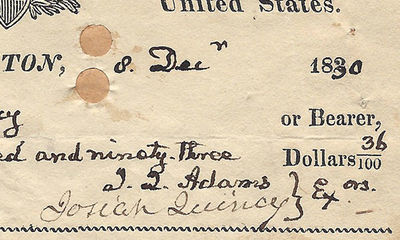 08/12/1830. John Q. Adams John Adams died on July 4, 1826, exactly 50 years after signing the Declaration of Independence which he was so instrumental in creating and getting approved. In perhaps American history’s greatest coincidence, his death occurred the same day as that of Thomas Jefferson, the author of the Declaration. They were the last of the greatest Founding Fathers, and with their passing from the scene an era ended and only one signer of the Declaration of Independence was left alive. Adams died during the second year of his eldest son's presidency.Adams left a will that was quickly admitted to probate, and on August 1, 1826, the probate judge issued Letters of Administration stating that in his will, the late President had “committed unto John Quincy Adams, Doctor of Laws, and Josiah Quincy, Doctor of Laws, both of Boston, in the County of Suffolk and Commonwealth aforesaid, the Executors in the same Will”, and that they must act “well and faithfully to execute the said Will, and to administer the Estate of the said Deceased according thereunto; and to make a true and perfect inventory of all and singular the Goods, Chattels, Rights and Credits of the said Deceased; and to exhibit the same into the Registry of the Court of Probate for the County aforesaid, at or before the first Day of November next ensuing…” John Quincy Adams was the deceased’s eldest son, and Josiah Quincy III was the Mayor of Boston and the son of his late friend and co-counsel in the Boston Massacre trial. Quincy would soon take office as President of Harvard University, from which both Adamses had graduated.Adams left a large estate, as was shown by the inventory the executors filed on September 5. He owned 18 properties with just under 400 acres of land, the real estate value totaling some $20,000. When that was added to the myriad furniture, furnishings, personal belongings, funds and stocks in companies, the appraised value of the estate came to $43,088.87. This would be the equivalent of about $1 million today, but it actually understates the value, as the U.S. government was selling land in the west at that time for $1.25 an acre, and would in time cut that to 12.5 cents an acre.The inventory done, the executors now commenced the laborious task of handling the bequests and the conditions imposed on those bequests. So we see that later that month, on September 30, 1826, the executors dealt with President John Quincy Adams receiving the home property from his father’s estate. “Whereas John Adams…did by his Last Will and Testament, give and devise to his son John Quincy Adams, and to his Heirs, all that part of his Real Estate, lying on both sides of the Ancient County Road from Boston to Plymouth, containing by Estimation one hundred and three Acres…together with his Mansion house, gardens and buildings thereon situated”, this being done on condition that John Quincy Adams should pay $10,000 to his father’s estate.It would take some time for the beneficiaries to make required payments like that, for land titles to be transferred, for legatees to receive their bequests, and for the administrative aspects of the estate to be complied with. So after a flurry of activity in September 1826, four years went by before the executors would be in the position to wind up the estate. This was finally done in December 1830, when the executors got down to paying themselves the fees they were due to receive for having acted in the responsible and the-consuming position of executors. The Adams Papers records that on December 8, 1830, John Quincy Adams and Josiah Quincy III issued a receipt for a check and note “for making second and final payment of devises and executors' fees from John Adams estate”.This check to Quincy, issued that same day, was clearly payment to Quincy for his services and/or expenses as executor of John Adams’s estate. Check signed, on the checking account with the “Office of Discount and Deposit of the Bank of the United States”, Boston, December 8, 1830, paying to Josiah Quincy the sum of $593.36, and signed by both Adams and Quincy. The entire handwritten portion of the check is in Adams’s hand, including the notation that he and Quincy are signing as executors. (Inventory #: 17555)
$10,000.00 add to cart Available from Raab Collection
Share this item