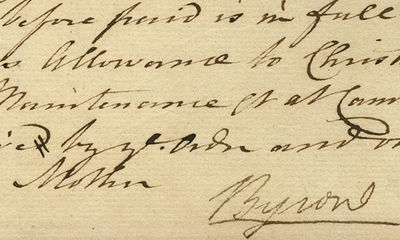 by Lord Byron
19/12/1805. ""...allowance to Christmas next for my maintenance etc at Cambridge...""In 1801, great English Romantic poet Lord Byron was sent to Harrow, a distinguished preparatory school, where he remained until July 1805.  At that point, he engaged to enter Cambridge.His mother received 500 pounds a year from the Court of Chancery for her son’s education, so when he went to Cambridge, she gave up this allowance to her son to pay for his education, which provided a comfortable sum for the young man.  His relationship with his mother was tumultuous, and he used this sum, as well as a further sum promised just to his mother from the Chancery, to use Cambridge to declare his independence.“As I am to have a very handsome allowance which does not deprive her of a sixpence since there is an addition made from my fortune by the Chancellor for the purpose, I shall be perfectly independent of her and as she has long since trampled upon and harrowed up every affectionate tie.""Cambridge was a formative time, where he met and formed a close friendship with the younger John Edleston and many others who would influence or whom he would influence.  He spent three years at Trinity College.Document signed, “Byron,” being his final disbursal of pay for his tuition expenses at Cambridge for his first quarter there.  “Received 19th December 1805 of Mr. John Hanson the sum of Fifty Pounds which with Seventy five pounds before paid is in full for a quarters allowance to Christmas next for my maintenance etc at Cambridge and which I received by your order and on account of my mother.”Comes with a financial document in the hand of his mother; both affixed to a light board. (Inventory #: 15357)
$5,500.00 add to cart Available from Raab Collection
Share this item