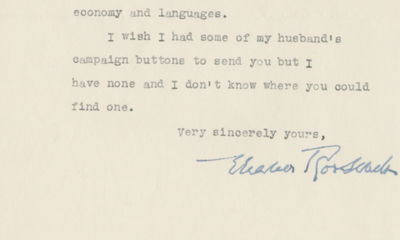 by Eleanor Roosevelt
2/10/56. The letter also mentions her husband, Franklin D. RooseveltAfter her years as First Lady, Eleanor Roosevelt served as U.S. Delegate to the United Nations General Assembly. It was a post that perfectly suited her desire to contribute to world peace. And she always took an interest in young people, and was glad to advise them.Typed Letter Signed, on her personal letterhead, New York, October 2, 1956, to a Mr. Hardgrave telling him the subjects she would need to study. “In reply to your letter, I would advise you to study history, political economy and languages.""I wish I had some of my husband’s campaign buttons to send you, but I have none and I don’t know where you could find one.”The areas of studies she mentions would have been of great benefit to someone who wanted to work at the United Nations in which she had been active since its beginning. (Inventory #: 20049)
$1,000.00 add to cart Available from Raab Collection
Share this item