With the 1955 Geneva “Big Four” Summit to Ease Cold War Tensions Over, President Dwight D. Eisenhower Readies to “entrust the Geneva Conference to the judgment of history” He thanks Ambassador Lewellyn Thompson, soon to begin his lengthy stint in Moscow, for his assistance . 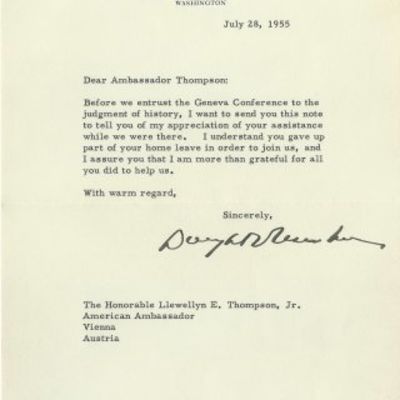 28/07/1955. Dwight D. Eisenhower This meeting resulted in the short hiatus in Cold War pressures known as the Spirit of GenevaSoviet relations with the United States chilled after World War II as the Soviet Union exerted its influence - or simply imposed its will - on the satellite states of Eastern Europe.  Then came the Communist takeover of China, which the Soviets applauded. The Korean War began in 1950, and the Soviets gave their support to the Communist government in North Korea.  When American nuclear research produced the hydrogen bomb in 1952, the Soviets followed suit in 1953. On May 5, 1955, West Germany joined NATO, making Soviet leaders nervous. On May 14,  the Soviet Union signed agreements with its satellite regimes, creating what was called the Warsaw Pact. According to the agreement, each member nation would be defended against ""imperialist"" interference or military intervention. This heightened anxieties in the West, most particularly in Washington.In May 1955, seeing East-West tensions rising fast, Britain and France proposed a conference with Soviet leaders to ease the situation, at the same time as the Soviet Union was trying to negotiate a withdrawal of the World War II allies from their occupation of Austria. The U.S., U.S.S.R., Britain and France signed an agreement that reestablished Austria's independence, with the proviso that Austria would remain ""forever neutral"" in foreign affairs. The Kremlin pulled its troops out of Austria, and, of the three countries divided at the end of World War II, Austria became the first to achieve reunification. Eisenhower was impressed by the Soviet Union's behavior regarding Austria, and determined to accept the British and French proposal for a summit meeting at Geneva. He was concerned about the arms race and was hopeful that a summit meeting would help create an atmosphere of trust between the Soviet Union and his administration.The summit meeting opened on July 18, 1955. Attending were President Eisenhower for the U.S., Premier Nikolai Bulganin and Nikita Khrushchev for the U.S.S. R., Prime Minister Anthony Eden for Britain, and Prime Minister Edgar Faure for France. The agenda for the summit included discussions on the future of Germany and arms control. As it became clear that no consensus could be reached on the issue of possible German reunification or the precise configuration of an arms control agreement, Eisenhower dramatically unveiled what came to be known as his ""Open Skies"" proposal. It called for the U.S. and the Soviet Union to exchange maps indicating the exact location of every military installation in their respective nations. With these maps in hand, each nation would then be allowed to conduct aerial surveillance of the installations in order to assure that the other nations were in compliance with any arms control agreements that might be reached. While the French and British expressed interest in the idea, the Soviets rejected any plan that would leave their nation subject to surveillance by a Western power. Nikita Khrushchev declared that Eisenhower's ""Open Skies"" was nothing more than an ""espionage plot.""Despite this, Eisenhower left the Geneva summit impressed by the Soviet leaders’ desire for good relations with the West - what was then called the “Spirit of Geneva”. However, Khrushchev left Geneva still concerned about Soviet competition with the West and what he called their tricks. But his mind was on domestic affairs, as he would soon be chosen leader of the Communist Party and make his speech denouncing Stalin.Lewellyn Thompson was one of the most important American diplomats of the 20th Century.  He was United States Ambassador to Austria from 1955-1957, then became Ambassador to the Soviet Union at the height of the Cold War. He served two separate tours in the administrations of Presidents Dwight D. Eisenhower, John F. Kennedy, and Lyndon B. Johnson, and then acting as advisor to Richard M. Nixon.  Few Ambassadors faced as many crises as Thompson did in Moscow - the shooting down of a U.S. U-2 reconnaissance aircraft over Russia, the great confrontation between the U.S. and Soviet Union over Berlin and the building of the Berlin Wall, very difficult summits between Soviet Premier Khruschev and Presidents Eisenhower and Kennedy, the August 1968 Soviet invasion of Czechoslovakia, and tensions over the Vietnam War.Thompson had helped set up the summit, and Ike wrote to thank him. Typed letter signed, on White House letterhead, Washington, July 28, 1955, to Thompson. “Before we entrust the Geneva Conference to the judgment of history, I want to send you this note to tell you of my appreciation of your assistance while we were there.  I understand you gave up part of your home leave in order to join us, and I assure you that I am more than grateful for all you did to help us. With warm regard…” This letter comes from the Thompson descendants. (Inventory #: 9002)
$3,500.00 add to cart Available from Raab Collection
Share this item