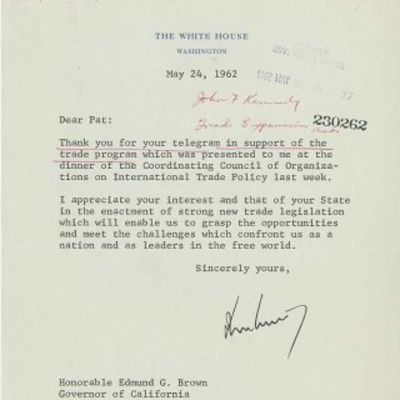 by John F. Kennedy
24/05/1962. In 1962, Kennedy's greatest economic worry was the country's balance-of-payments. The United States was buying more than it was selling - and the international trade deficit of $5 billion dollars weaked the value of the currency, risked inflation, and gave foreign nations the power to claim their debts in gold. In order to strengthen the currency and ameliorate these problems, Kennedy needed to boost trade. He wanted the authority to negotiate lower tariffs, and he wanted power, too, to compensate American workers whose jobs would be lost to foreign competition. This was the basis of the Trade Expansion Act, introduced in his January State of the Union Message - and which would eventually see passage nine months later. But in May, the issue was far from settled; here the President stumps for the Act, shoring up support as he praises its benefits.Typed Letter Signed as President, on green White House letterhead, Washington, May 24, 1962. “Thank you for your telegram in support of the trade program which was presented to me at the dinner of the Coordinating Council of Organizations on International Trade Policy last week. I appreciate your interest and that of your State in the enactment of strong new trade legislation which will enable us to grasp the opportunities and meet the challenges which confront us as a nation and as leaders in the free world.”                                    (Inventory #: 3373)
$7,000.00 add to cart Available from Raab Collection
Share this item