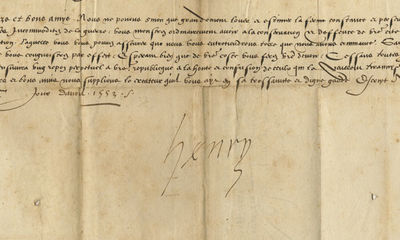 by Henry II
08/04/1553. A very rare and important letter of the French KingThe Eighth Italian War of 1551–1559, sometimes known as the Habsburg–Valois War, began when King Henry II of France declared war against Holy Roman Emperor Charles V, who was King of Austria and Spain, with the intent of recapturing Charles’ holdings in Italy and ensuring French, rather than Habsburg, domination of European affairs. Persecution of Protestants at home did not prevent Henry II from becoming allied with German Protestant princes, which he did at the Treaty of Chambord in 1552. Simultaneously, the continuation of his father's Franco-Ottoman alliance allowed Henry II to push for French conquests eastward towards the Rhine while a Franco-Ottoman fleet defended southern France. An early offensive into Lorraine was successful. Henry captured the three episcopal cities of Metz, Toul, and Verdun, and secured them by defeating the Habsburg army at the Battle of Renty in 1554.While Henry II was occupied with the campaign in Flanders, the war against the Hab_sburgs was renewed in Italy. When the city of Siena in Tuscany rebelled against Habsburg occupation and established an independent republic, Henry provided financial and military support to the new regime, sending troops to buttress the city's defenses against an imperial coun_teroffensive. Through his intervention in Tuscany, Henry II gained a foothold in central Italy for future initiatives against Milan. To further his war effort against Charles, Henry signed an agreement with the Ottoman Empire, resulting in the joint naval attack and conquest of the Habsburg occupied island of Corsica.Document signed, April 8, 1553, in French, to ""My dear and good friends the Councillors and Officers of the Republic of Sienna,” pledging his support and preparing to set foot on Tuscan soil. “We can only greatly admire and esteem the constance and perseverance which, in spite of all the trials of war, you continue to show in the conservation and defense of your city and state, under our protection, protection of which you can be assured that we will undertake as we have begun, without withholding anything… hoping that you will do what you must in return, ceasing all infighting and division from which will following the perpetual tranquility of your republic to the shame and confusion of those would tyrannize and oppress….”Despite these assurances, in the end the Sienese gave up, and Henry terminated his Italian war by renouncing his claims to territories in Italy. The Habsburgs retained control of Italy for centuries to come. (Inventory #: 15096)
$6,000.00 add to cart Available from Raab Collection
Share this item