President Herbert Hoover, Days Before Leaving Office, Makes It Clear He Will Continue in Public Life “I…expect to devote considerable time to public questions, with more freedom outside public office then is possible on the inside.” 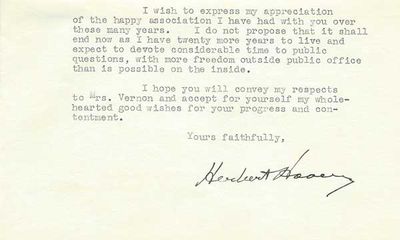 24/02/1933. Herbert Hoover He expresses some doubts about his legacy as president, writing: “I wish I could believe all that you feel…”On October 24, 1929 - only seven months after Hoover entered the Oval Office - a precipitous drop in the value of the U.S. stock market sent the economy spiraling downward and signaled the start of the Great Depression. Banks and businesses failed across the country. Nationwide unemployment rates rose from 3 percent in 1929 to 23 percent in 1932. Millions of Americans lost their jobs, homes and savings. Many people were homeless, untold millions more in despair, and it was common to see bread lines for food. Outside large cities the homeless took to living in squalid shantytowns known derisively and somewhat unfairly as Hoovervilles.Hoover undertook measures designed to stimulate the economy, and a few of the programs he introduced became key components of later relief efforts. However, his response to the crisis was constrained by his conservative political philosophy. He believed in a limited role for government and worried that excessive federal intervention posed a threat to capitalism and individualism. He felt that assistance should be handled on a local, voluntary basis. Accordingly, Hoover vetoed several bills that would have provided direct relief to struggling Americans. “Prosperity cannot be restored by raids upon the public Treasury,” he explained in his 1930 State of the Union address.The Depression worsened throughout Hoover’s term in office, and by 1932 critics increasingly portrayed him as indifferent to the sufferings of the American people. By the time of that year’s presidential election, Hoover had become an unpopular figure across much of the country. Hoover’s opponent was Democratic candidate Franklin D. Roosevelt, whose philosophy differed from Hoover’s. As FDR stated: “The country needs and, unless I mistake its temper, the country demands bold, persistent experimentation. It is common sense to take a method and try it; if it fails, admit it frankly and try another. But above all, try something. The millions who are in want will not stand by silently forever while the things to satisfy their needs are within easy reach.” This was much more appealing to a nation in Depression. Carrying only six states, Hoover was soundly defeated, and he felt bitter and unfairly treated.As his term drew to a close, Leroy T. Vernon, head of the Washington Bureau of the Chicago Daily News, apparently sent Hoover a letter complimenting the job he had done as president. Just eight days before he left office, feeling rejected by the people, Hoover responded by expressing some reservations about Vernon’s compliments, and moreover stated his feeling that the presidency was confining, and that he would be freer in private life.Typed letter signed as President, on White House letterhead, Washington, February 24, 1933, to Vernon, saying that he will stay active in public life. “I was deeply touched by your letter this morning. I wish I could believe all that you feel, but in any event I am glad to have you say it. I wish to express my appreciation of the happy association I have had with you over these many years. I do not propose that it shall ends now as I have 20 more years to live and expect to devote considerable time to public questions, with more freedom outside public office then is possible on the inside. I hope you will convey my respects to Mrs. Vernon and accept for yourself my wholehearted wishes for your progress and contentment.” This letter appears to be unpublished. It was obtained from the estate of one of Vernon’s descendants and has never before been offered for sale.After leaving office, Hoover emerged as a prominent critic of Roosevelt’s New Deal programs. He wrote articles and books outlining his conservative political views and warning about the dangers of investing too much power in the federal government. Hoover returned to public service in the 1950s, serving on commissions aimed at increasing government efficiency for presidents Harry Truman and Dwight Eisenhower. Hoover’s projections about his longevity were on the low side, however, as he died at age 90 on October 20, 1964, a full 31 years after writing this letter. By then assessments of his legacy had grown more favorable. (Inventory #: 14470)
$2,000.00 add to cart Available from Raab Collection
Share this item