President Dwight D. Eisenhower Writes the Synagogue Council of America Saying He Wants to Make American Principles ""better understood throughout the world” He believes religious organizations can ""contribute to lessening world tensions and to helping solve our problems” 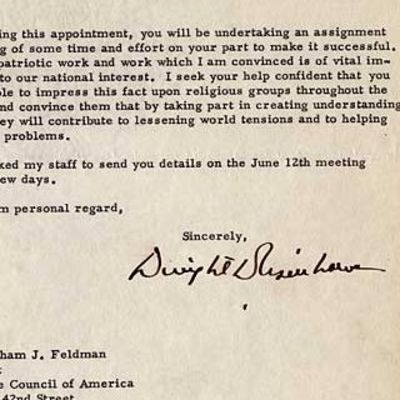 29/05/1956. Dwight D. Eisenhower Abraham J. Feldman was born in Kiev, Ukraine and came to the U.S. in 1906 at age 11. In 1918, he was ordained as a rabbi at the Hebrew Union College, and then served as fellowship assistant for Rabbi Stephen S. Wise at his Free Synagogue in New York. A year later, Feldman went on to Congregation Children of Israel in Athens, Ga. and then spent five years as rabbi to the Reform Congregation Keneseth Israel in Philadelphia. In 1925 Feldman was selected as rabbi of Congregation Beth Israel in West Hartford, CT, where he remained until retiring in 1977. While at Beth Israel, Feldman was a leader not only in Connecticut Jewish life, but also in ecumenical and secular organizations. In 1929 he was a co-founder of the Connecticut Jewish Ledger, of which he remained editor until 1977.Feldman was prominent in Jewish organizations at the national level, as well. He was a member of the Board of Governors of Hebrew Union College and served on the executive council of the Union of American Hebrew Congregations, the oldest American federation of Jewish congregations and a long-time center of Reform Judaism. Long a member of the Central Conference of American Rabbis, the principal organization of Reform Jewish rabbis in the United States, Feldman rose in 1947 to become its President. From 1952-1957, he served as President of the Synagogue Council of America, a joint organization of Reform, Conservative, and Orthodox Jewish communities which acted to coordinate Jewish life and activities in America. The organization did more than act as facilitator of activities and dialogue between the branches of American Judaism, it made the world outside aware of Jewish concerns. In addition, he participated in Zionist activities, and was on the publications committee of Jewish Publication Society and the National Committee of the Jewish Book Council of America. A prolific writer, Feldman penned more than 26 books, pamphlets, and articles.Rabbi Feldman had a small but significant correspondence from three presidents on such topics as the contributions of Jews to American society, the refuge that the United States has provided, and their advocacy and defense of American institutions. We recently obtained the letters directly from the Feldman family; they have never been offered for sale before.President Eisenhower had a strong belief that the national security was served by providing assistance to other nations, and was in office just months before developing a foreign aid package that would further that goal.  This, his Mutual Security Program (MSP), provided billions of dollars annually to countries in Europe, Southeast Asia, the Middle East, Africa and Latin America. Most of the money went to build up the military in those nations, those a substantial sum remained for technical and economic development. The Administration knew that every year, its MSP faced a rough reception on Capitol Hill, where many in the President’s own party opposed foreign aid as a giveaway. So Eisenhower was always seeking popular support for the program, support that would reach the ears of Congressmen.Typed Letter Signed on White House letterhead, Washington, May 29, 1956, to Feldman as President of the Synagogue Council of America, seeking his active participation in the MSP. “Our Government, as you know, has relatively modest apparatus for trying to make the United States’ objectives and principles better understood throughout the world. I have asked Congress for additional funds to strengthen this activity during fiscal ‘57. But clearly, there will never be enough diplomats and information officers at work in the world to get the job done without help from the rest of us. Indeed, if our ideology is eventually to win out in the great struggle being waged between the two opposing ways of life, it must have the active support of thousands of independent private groups and institutions and of millions of individual Americans acting through person-to-person communications in foreign lands...""In a very real sense, to be successful we must wage peace with all the vigor and resourcefulness and universal participation of wartime. It is my intention to call upon all U.S. citizens to help their Government in this task; but before doing so, I would like to bring together on June 12th at the White House a group of distinguished American leaders to assist with the organization of various phases of the work. I earnestly hope, therefore, that it will be possible for you to participate as one of these leaders and assume the co-chairmanship… ""In accepting this appointment, you will be undertaking an assignment demanding of some time and effort on your part to make it successful.  But it is patriotic work and work which I am convinced is of vital importance to our nation’s interest. I seek your help confident that you will be able to impress this fact upon religious groups throughout the country and convince them that by taking part in creating understandings abroad they will contribute to lessening world tensions and to helping solve our problems. I have asked my staff to send you details on the June 12th meeting within a few days.” (Inventory #: 3318)
$6,000.00 add to cart Available from Raab Collection
Share this item