President Herbert Hoover Offers No Encouragement to Bank of America Owner Amadeo Giannini His bank had been left off committees to dispense Federal funds to banks during the Depression. 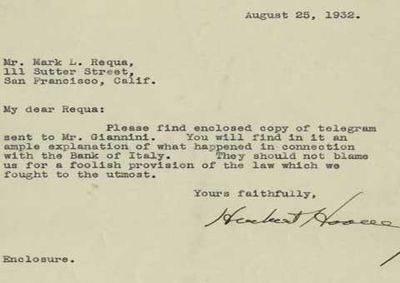 25/08/1932. Herbert Hoover Mark L. Requa was a mining engineer, oil, railraod and coal entrepreneur, and author of such books as “The Relation of Government to Industry.” He first met Hoover in 1905 and they became close friends. Hoover named him Chief of the Oil Division of the United States Fuel Administration in World War I. During Hoover’s presidency, Requa was one of Hoover’s chief spokepersons in matters relating to oil and natural resources, and he had the President’s attention on matters of business/government relations.The Reconstruction Finance Corporation was an independent agency of the United States government, established by Congress in 1932. The agency gave money to state and local governments and made loans to banks, mortgage associations and other businesses. A committee of bankers and businessmen was formed in each state to advise on dispensing the funds. In California, Amadeo Giannini’s Bank of Italy (in the process of changing its name to Bank of America) was the only major bank in the state to be left off, the committee being made up of its rival banks. In the midst of the Depression, with its deposits low and the Bank of Italy struggling, this was a blow and angered Giannini. He complained to Requa as a way of getting the President’s ear to bring to his notice the unfairness of this. Requa wrote the President, who responded.Typed Letter Signed as President, on White House letterhead, Washington, August 25, 1932, to Requa, essentially washing his hands of the matter. “Please find enclosed copy of telegram sent to Mr. Giannini. You will find in it an ample explanation of what happened in connection with the Bank of Italy. They should not blame us for a foolish provision of the law which we fought to the utmost.”  (Inventory #: 9776)
$1,200.00 add to cart Available from Raab Collection
Share this item