Camelot Blossoms in the Kennedy Administration President John F. Kennedy Thanks the American Shakespeare Festival for Giving the First Ever Shakespeare Performance at the White House 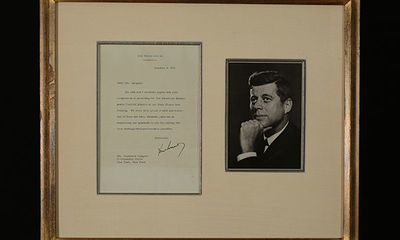 5/10/61. John F. Kennedy In November of 1961, two Washington Post columnists hailed President John F. Kennedy as “the best friend culture has had in the White House since Thomas Jefferson.” President Kennedy appreciated the arts and demonstrated his dedication to the arts community throughout his administration. He and his First Lady, Jacqueline Kennedy, invited the media to cultural events at the White House, highlighting its role in influencing the public’s perception of the arts. The Kennedys invited many popular performing arts organizations to entertain at the Executive Mansion, including The Metropolitan Opera, Jerome Robbins Ballet, American Ballet Theater, and American Shakespeare Festival.Lawrence Langner started his theatrical career as one of the founders of the Washington Square Players troupe in New York in 1914. In 1919 he founded the Theatre Guild, where he supervised over 200 productions. He was awarded the 1958 Tony Award for best play production for “Sunrise at Campobello”, a play about Franklin D. Roosevelt. He was also founder and Chairman of the American Shakespeare Festival, and as head of that organization, he received an invitation to have his repertory company perform at the White House, and he accepted.On October 4, 1961, the American Shakespeare Festival gave the first ever performance of Shakespeare at the White House. It included readings and scenes from its repertory, including the Prologue from Henry V, the murder of Duncan from MacBeth, and Prospero’s soliloquy from The Tempest, among others.Typed letter signed, on White House letterhead, Washington, October 5, 1961, to Lawrence Langner in New York. “My wife and I certainly appreciate your cooperation in providing for The American Shakespeare Festival at our State Dinner last evening. We were very proud of each and every one of them and Mrs. Kennedy joins me in expressing our gratitude for making this very distinguished performance possible.”Looking back on the flowering of optimism, excitement and culture that marked the Kennedy years, Jacqueline Kennedy called those years after a popular musical at the time - “Camelot.” This letter is the very symbol, the very essence of the Kennedy’s Camelot - Shakespeare at the White House. (Inventory #: 19687)
$9,500.00 add to cart Available from Raab Collection
Share this item