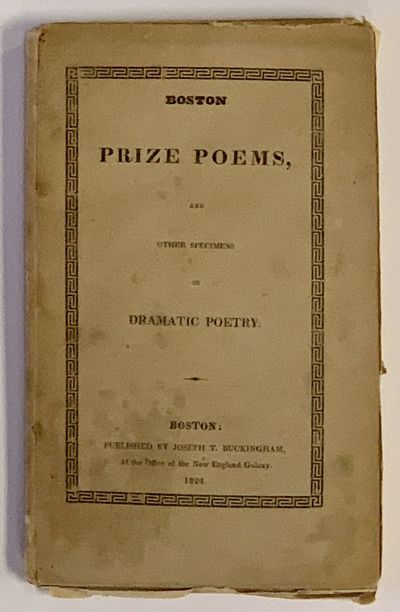 by [Longfellow, Henry Wadsworth. 1807 - 1882] - Contributor. Sprague, Charles - Prize Winner
Boston: Published by Joseph T. Buckingham, At the Office of the New England Galaxy, 1824. 1st printing (BAL 12036). Cf. The Colophon, New Graphic Series, Vol. One, No. 4, pp. 55-62 for an article by Lawrance Thompson giving the background story on the discovery Hawthorne's authorship. Original publisher's printed buff paper boards. This original binding was preserved by a paper wrapper that was installed over the printed covers soon after publication. The last owner partially removed the paper wrapper but did not try to remove the ends of the paper that were folded and glued on the inside of the covers. This copy includes ownership signatures of Philip Carrigain [1772 - 1842], a lawyer, who owned a general store in Concord, NH, was also a member of the New Hampshire Legislature, surveyor for the State, and produced first official map of New Hampshire. Ownership of the book then passed Asa Fowler [1811 - 1885], New Hampshire politician, lawyer & N.H. Supreme Court Justice, from whom the book passed to William Plummer Fowler, Jr. [1900 - 1993], poet and lawyer, and his wife Ellen [1902 - ?]. The original printed boards have minor stains and the head and tail of the of the spine have some minor loss. And with a nod to the cover remnants, a VG copy.. Longfellow's poem, pp. 27 - 31. iv, [9] - 130 pp. 12mo. 7-11/16" x 4-13/16"

In 1823 the Boston Theatre advertised a poetry contest in local newspapers. The resulting contest, with ~ 30 entries, including that of young Longfellow, was won by Charles Sprague. In 1824 this volume was published, which includes the winning poem by Sprague and several poems by other unidentified poets, which, according to the Introduction, are presented in meritorious order, as determined by the contest judges. Longfellow's is third.Ca 1940, the poem on pages 27-31 was identified as having been written by Henry Wadsworth Longfellow, and as such, his first appearance in a published book. According to the RBH commercial history of this title, it was last offered in the market over 3 decades ago, in 1987.Rare in the trade. (Inventory #: 48946)
$1,500.00 add to cart or Buy Direct from Tavistock Books
Share this item

Logtown, Eldorado County, California 1851
(click for more details about ACCOUNT AGAINST SQUIRE BIGALOW. $20.27. February 1851. Logtown)
View all from this seller>