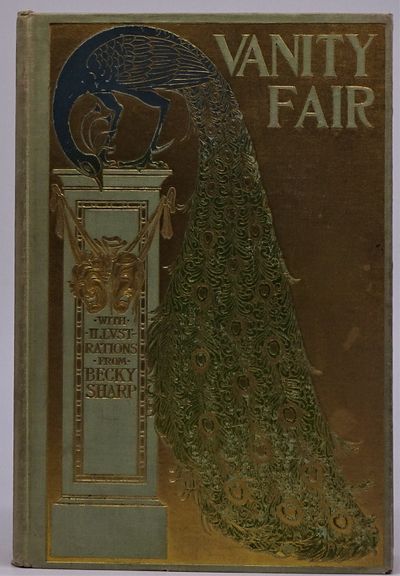 by Thackeray, William Makepeace
New York and Boston: H. M. Caldwell Company, 1900. The Green Room Edition, "illustrated by photographs from the life of Mrs. Fiske and her company in the play of Becky Sharp, by Byron and Sarony, also 186 illustrations by Author". iv, 770 pp., 8vo. Near Fine in decorative cloth boards featuring a peacock in intricate gilt and green, the back also intricately decorated in gilt, top edge gilt, two small faint dull spots front board, very faint soiling rear boards, initials and date in ink front end page at gutter, small stain frontispiece and tissue guard. The play referred to is "Becky Sharp", a play in four acts by Langdon Mitchell, presented by Mrs. Fiske, founded on Thackeray's "Vanity Fair, first presented at the Fifth Avenue Theatre, New York, September 12, 1890, starring Tyrone Powers , Maurice Barrymore, and Minnie Madern Fiske as Becky Sharp. An edition made most pleasing to read with its combination of the play's photographs interspersed with Thackeray's always charming illustrations. A quite pleasing example of turn of the century fine American binding, SCARCE in such lovely condition. . Green Room Edition . Decorative Cloth. Near Fine/No Jacket, As Issued. 8vo - over 7¾" - 9¾" tall. (Inventory #: 008438)
$500.00 add to cart Available from
Dale Steffey Books
Share this item
Dale Steffey Books
Offered by

New York : Dodd Mead and Company , 1904
(click for more details about When Malindy Sings)
View all from this seller>