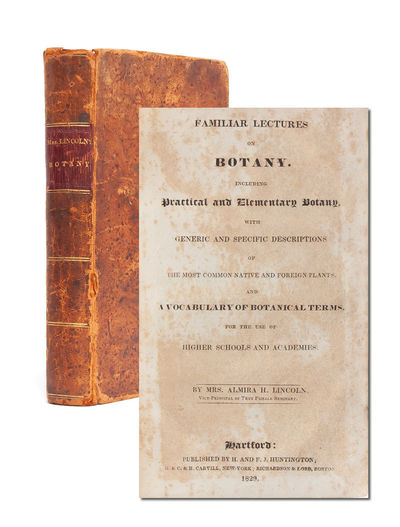 by [Phelps, Almira] Mrs. Almira H. Lincoln, Vice Principal of Troy Female Seminary
Hartford: H. and F.J. Huntington, 1829. First edition. Contemporary tree calf with morocco label to spine. Gentle shelfwear to extremities; front joint cracked but sound. Rear endpaper partially adhered to pastedown. Internally with some light scattered foxing as is common in imprints of the era, else clean and unmarked. Collating x, 11-335, [1, errata], 4: complete, including thirteen plates. The most popular botany textbook of its time and the first book by education activists Phelps, the present is surprisingly scarce in trade. It last appeared at auction in 1989, and this is presently the only copy on the market. A pioneer in American women's education, Almira Phelps began her career tutoring students of the all-male Middlebury College in science, mathematics, and philosophy. "This experience illustrated the disparity between education available for men and for women, and Almira spent the rest of her life fighting for more educational opportunities for females" (History of American Women). Joining forces with her sister Emma Willard, the founder of the Troy Female Seminary in New York, Phelps began to teach rigorous humanities and science courses in addition to lecturing publicly on behalf of women's rights for equal education. Phelps established herself as a frontrunner in the field, publishing ten books on the education of women. The present work is the first of these, and it brought her into dialogue with earlier British women citizen-scientists such as Priscilla Wakefield and Jane Marcet. Like her predecessors, Phelps wanted to make the study of botanical science accessible to readers, bringing them into contact with the field's vocabularies and practices, and encouraging them to find opportunities for study in the areas around them. Yet her book pushed this movement to the next level, as it was designed specifically for the use of advanced schools. To this end, it is designed for classroom instruction, includes a note To Teachers, and provides at rear sections on Vocabulary, Analysis and a functional index. Ultimately, Familiar Lectures on Botany made it possible for instructors -- especially women -- to improve the method and practice of their lessons by referring to Phelps' own tried and true methods. And it made botanical education of a more rigorous kind available to a new generation of students. Ogilvie's Women in Science 147. History of American Women. (Inventory #: 3921)
$2,000.00 add to cart or Buy Direct from
Whitmore Rare Books
Share this item

The Town and the City

New York : Harcourt, Brace and Company , 1950
(click for more details about The Town and the City)

The Anatomy of Plants. With an Idea of a Philosophical History of Plants, and Several Other Lectures Read Before the Royal Society

London : W. Rawlins , 1682
(click for more details about The Anatomy of Plants. With an Idea of a Philosophical History of Plants, and Several Other Lectures Read Before the Royal Society)
View all from this seller>