REPORTS OF THE TRIALS OF COLONEL AARON BURR, (LATE VICE PRESIDENT OF THE UNITED STATES,) FOR TREASON, AND FOR A MISDEMEANOR [TWO VOLUMES] 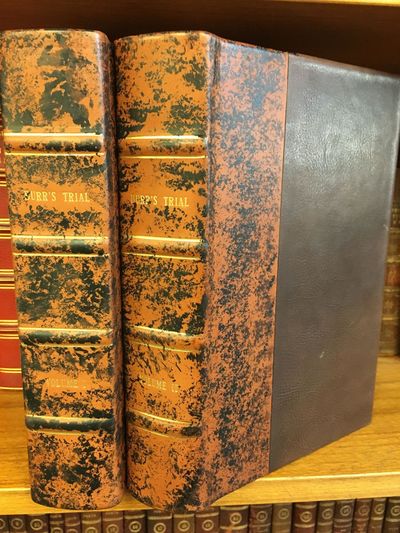 by Robertson, David [shorthand]
Philadelphia: Hopkins and Earle, 1808. First Edition. Hardcover. Octavos, 2 volumes; G; newly rebound in half patterned leather, boards brown leather, paneled spines with gilt; marbled endpapers; ex-library stamp to both title pages; lower fore corner of volume 1 title page missing; pages 1-16 of volume 1 missing; previous owners name on title page of volume 1, half-title of volume 2; some foxing and pencil markings throughout both volumes; shelved above Revolutionary War. Full title continues: "in Preparing the Means of a Military Expedition Against Mexico, a Territory of the King of Spain, with Whom the United States Were at Peace, in the Circuit Court of the United States, Held at the City of Richmond, in the District of Virginia, in the Summer Term of the Year 1807. To Which Is Added, an Appendix, Containing the Arguments and Evidence in Support and Defence of the Motion Afterwards Made by the Counsel for the United States, To Commit A. Burr, H. Blannerhassett and I. Smith, To Be Sent for Trial to the State of Kentucky, for Treason or Misdemeanor, Alleged To Be Committed There";. 1317525. Shelved Dupont Bookstore. (Inventory #: 1317525)
$240.00 add to cart or Buy Direct from
Second Story Books
Share this item

APOLOGIES TO THE IROQUOIS [SIGNED]

New York : Farrar, Straus and Cudahy , 1960
(click for more details about APOLOGIES TO THE IROQUOIS [SIGNED])