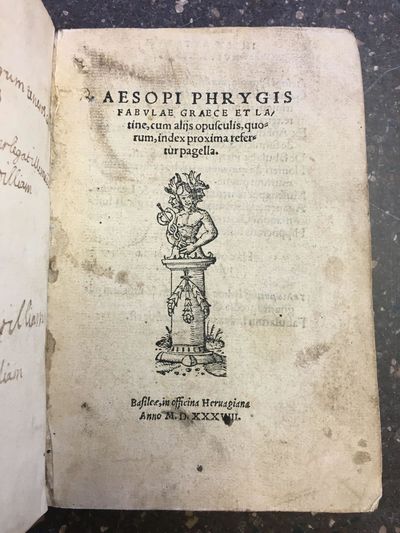 
Text in Greek and Latin on facing pages for the Aesop, Greek only for the Galeomyomachia


Provenance to the recto and verso of the ffep, Fitzwilliam family provenance in several early hands, the largest stating playfully: "William Fitzwilliam not his Book, but John Fitzwilliam his booke";


Scattered marginalia and underlining, including extensive minute annotations in an early faded 16th century hand around the rear printer's mark, other minor annotations throughout, notably in English on Midas on page 315.;

USTC lists 15 copies, 14 in Europe and 1 at the University of Toronto.;


A 1538 edition of Aesop's Fables printed by Johann Herwagen with an appended 1518 edition of the Galeomyomachia (Battle of Cats and Mice) printed by Johann Froben. Galeomyomachia usually found bound with five other printings by Froben, 1518.;. 1331015. Shelved Dupont Bookstore. (Inventory #: 1331015)
$4,000.00 add to cart or Buy Direct from
Second Story Books
Share this item

BASEBALL AND YOUR BOY [SIGNED]

Cleveland, OH : The World Publishing Company , 1967
(click for more details about BASEBALL AND YOUR BOY [SIGNED])