OMOO: A NARRATIVE OF ADVENTURES IN THE SOUTH SEAS 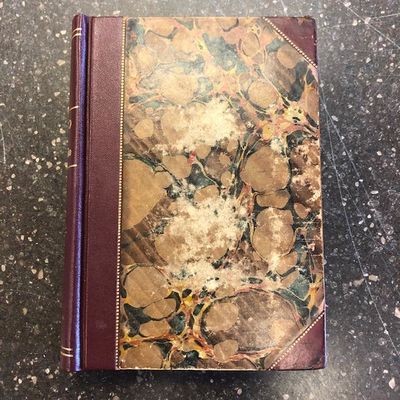 by Melville, Herman
London: John Murray, 1847. First British Edition, First Printing. Hardcover. Octavo, xiii, 321 pages; VG; bound in contemporary half-burgundy calf, marbled boards, rebacked with modern burgundy cloth, gilt titling to spine; mild wear and rubbing to boards; lacking terminal ads. BAL 13655: State C of page 209, no priority; frontispiece map.; WD consignment; shelved case 2. Omoo is the second book by American writer Herman Melville, first published in London in 1847, preceding the American edition by several weeks, and a sequel to his first South Sea narrative Typee, also based on the author's experiences in the South Pacific. After leaving the island of Nuku Hiva, the main character ships aboard a whaling vessel that makes its way to Tahiti, after which there is a mutiny and a third of the crew are imprisoned on Tahiti. In 1949, the novel was adapted into the exploitation film Omoo-Omoo, the Shark God. [wikipedia]. 1316775. Shelved Dupont Bookstore. (Inventory #: 1316775)
$560.00 add to cart or Buy Direct from
Second Story Books
Share this item

New York : Abbeville Press , 1980
(click for more details about TOM WESSELMANN)
View all from this seller>