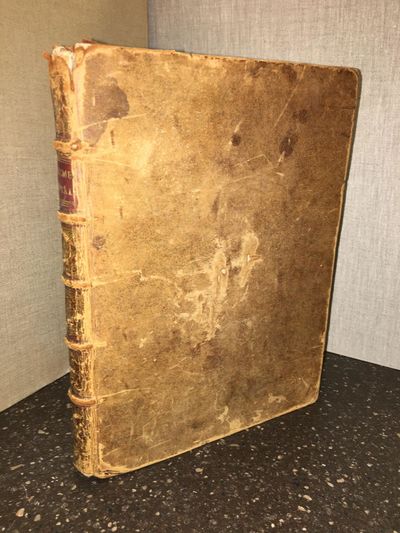 
BH consignment; shelved case 3. In Le Projet d'une dixme royale ("Project for a Royal Tithe"), one of the 18th century's most important writings on political reform, Sébastien Le Prestre de Vauban (1633-1707) suggested replacing existing taxes, which were unfair and offered limited yield, with a 10% income tax on all land and trade from which no one should be exempt. He substantiated his arguments with a mass of statistical documentation practically unprecedented and, in doing so, pioneered the use of statistics in economics. The idea, which occurred to Vauban as he made observations on his constant travels throughout the kingdom, was intended to help France overcome an economic crisis and keep its rank as a great power. As the situation worsened, in 1706 Vauban had his book secretly printed in François Maurry's Rouen press and gave his entourage the first copies, bound in Paris at the widow Fétil's. The French government, too deeply committed to the system of tax farming (i.e., selling the right to collect taxes to groups of financiers for a fixed sum), was reluctant and even unable to revoke the exemptions of the privileged classes. Their dependence on them, and lacking interest in fundamental reforms, led to the government suppressing the publication of his book. On February 14, 1707 the Privy Council ordered the destruction of all the copies, which had been published without permission. The ailing Vauban did not survive the affair, dying on March 30th. Subsequent searches of his home failed to turn up any other copies.;


According to Boislisle, the first edition was printed in Rouen in 1706 at the initiative of the Abbé de Beaumont (who is actually credited with the authorship of the work by Boisguilbert). Vauban had the sheets bound by the widow of a certain Fétil, and took great pains that the book did not have any public circulation. It was prohibited on 14 February 1707, but apparently the police were only able to seize two copies. To the police, the binder declared she had had 264 copies in total, 12 bound in morocco, the rest in calf. The two copies seized at the Abbé de Beaumont's were described as in 'veau fauve' and marbled parchment. See Arthur Michel de Boislisle, La Proscription du projet de Dime Royale et la mort de Vauban (Mémoire lu à l'Académie des sciences morales et politiques), Paris, 1875.;


A notable rarity, of 'an erudite economic work much in advance of its time, and distinguished both by accuracy of method and breadth of view' (Palgrave), 'creditable alike to the heart and the head of its illustrious author' (McCulloch). 'Though the book was published anonymously, and only a few copies issued (for circulation among friends), Vauban had to submit to the mortification of seeing it 'pilloried' by the parliament, while he himself incurred the displeasure of the king (Louis XIV).' (Palgrave).;


The copy of the author himself contained four pages of manuscript in which statements were to be found which could not be printed and in which Vauban, among other things, clearly distinguishes between nobles which have earned their title and position by their actions, whether by their ancestors and by themselves and are an honour to the State, and those who have purchased their titles and are of no use at all to the State. [Les Collections Aristophil].;


The Projet d'une Dixme Royale is an outstanding work in the field of public finance. Its two most notable features are its understanding of the central role of fiscal policy in economic reform - the result of an exceptionally comprehensive grasp of the economic process - and its use of detailed numerical data to substantiate conclusions. Schumpeter called the work 'unsurpassed, before or after, in the neatness and cogency of the argument . Purposeful marshalling of all the available data was the essence of his analysis. Nobody ever understood better the true relation between facts and argument. It is this that makes him an economic classis in the eulogistic sense of the work, and a forerunner of modern tendencies' (Schumpeter, History of Economic analysis, p. 204).;

THE WALKING DEAD NO. 9

Orange : Image Comics , 2004
(click for more details about THE WALKING DEAD NO. 10)
View all from this seller>