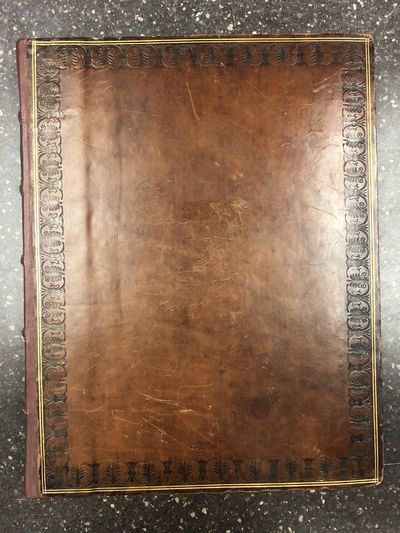 by Johnson, Samuel; Raimbach, A. [engravings]
London; Edinburgh: William Miller; The Letter Press by James Ballantyne, 1805. Hardcover. Quarto, iii, 197 pages; VG; bound in period blind and gilt calf, newly rebacked with brown leather, paneled spine with a black label and gilt lettering; marbled text block and endpapers; mild rubbing and wear to boards; bookplate of the Countess of Beauchamp on the ffep; ownership stamp on sfep; with 4 engraved plates and an engraved headpiece vignette; wide margins; shelved case 7. The History of Rasselas, Prince of Abissinia, originally titled The Prince of Abissinia: A Tale, though often abbreviated to Rasselas, is an apologue about happiness by Samuel Johnson. Early readers considered Rasselas to be a work of philosophical and practical importance and critics often remark on the difficulty of classifying it as a novel.[1] Johnson was a staunch opponent of slavery, revered by abolitionists, and Rasselas became a name adopted by emancipated slaves. [wikipedia]. 1317131. Shelved Dupont Bookstore. (Inventory #: 1317131)
$320.00 add to cart or Buy Direct from
Second Story Books
Share this item

CARVING OUT THE COMMONS: TENANT ORGANIZATION AND HOUSING COOPERATIVES IN WASHINGTON, D.C.

Minneapolis, MN : University of Minnesota , 2018
(click for more details about CARVING OUT THE COMMONS: TENANT ORGANIZATION AND HOUSING COOPERATIVES IN WASHINGTON, D.C.)

A HISTORY OF THE AMERICAN PEOPLE [FIVE VOLUMES]

New York : Harper & Brothers Publishers , 1908
(click for more details about A HISTORY OF THE AMERICAN PEOPLE [FIVE VOLUMES])
View all from this seller>