CICERO'S LAELIUS. A DISCOURSE OF FRIENDSHIP. TOGETHER WITH A PASTORAL DIALOGUE CONCERNING FRIENDSHIP AND LOVE 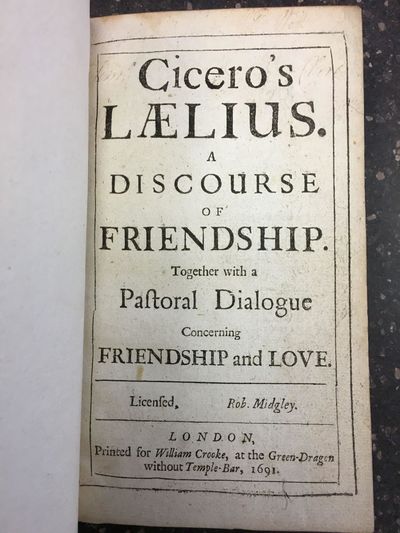 
"A pastoral dialogue concerning friendship and love. Occasion'd by the death of the Honourable J.T." has separate dated title page and pagination; register is continuous.;


Extremely scarce; shelved case 3. A Fascinating tale of Queer Love carefully appended to one of the quintessential dialogues on Friendship. With Cicero being translated and A Pastoral Dialogue being written just after the Glorious Revolution and during the Nine Years War, "when all the world is in arms...," [preface] these two pieces act as a soothing counterpart to the violence and change occurring in the world.;


William Crooke was a printer active from 1667-1694. He printed for Richard Flecknoe and Thomas Hobbes, and published various pieces of literature.;


"We know nothing about the author of the following 1691 translation of Cicero's Laelius, except that he was a friend of the almost equally anonymous J.T., to whom the author dedicates the original homoerotic pastoral dialogue appended to the translation. Described as "the Honourable" on the pastoral poem's separate title page, J.T. was obviously a member of the upper class, perhaps the younger son of a peer below the rank of marquess, although by the end of the seventeenth century the appellation 'honourable' was also used to describe those who actually held peerages and titles. Although by the end of the seventeenth century 'honourable' was also applied to MPs and justices, it seems unlikely that J.T. belonged to either of these groups. The poem's genre suggests that it was written by one relatively young man for another, and while MPs might well be young men, in most cases they were men well-established in their careers. A man would not become a justice or an alderman or a lord mayor (all of whom received the title 'honourable') until he was well past the age of majority. Charles Goodall's pastoral poems for his young college friends suggest there was a precedent for young men (in particular) to use this genre for the purposes of celebrating friendship and male homoerotic love (print anthology, pp. 384-99). [Loughlin, Marie H. 2012. "Online Companion to Same-Sex Desire in Early Modern England, 1550-1735: An Anthology of Literary Texts and Contexts."]


From the Preface: "I hope the Fair Sex [women] will not think their prerogative invaded, because in that poem I prefer Friendship to Love, since the Love I condemn there, is a Passion, which, I dare say, the Best and Modestest part of them will not think themselves concerned to defend. As for Conjugal Love, I look upon it as a Union of Souls as well as Bodies, and a State so exactly conformable to all the Laws of Friendship, that, methinks, the Names of Friend and Wife should signify the same."