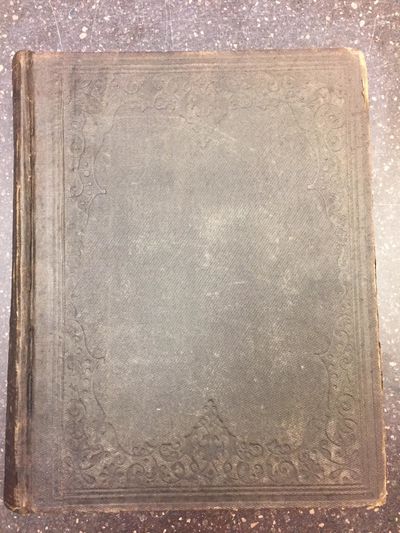 by Humphreys, A. A. Capt. & Warden, G. K. Lieut. et al, by Direction of Jefferson Davis Secretary of War
Washington: Beverley Tucker, Printer, 1857. First Edition. 4to., 134p., 85pp., 102pp., 114pp., iv, 64pp,; VG; dark brown blind-embossed boards, faded letters to spine; signs of repair to binding, with spine being rebacked, chipping to spine where rebacking is visible; some shelfwear and rubbing, particularly to corners; bump to middle of upper and lower edges of rear board; title page is misspelled, with the 'he' of 'the' missing; pages 51-54 of the botanical report slightly loose; 13 plates/2 woodcuts [lacking maps], 5 plates [complete], 16 plates [complete], plate XXIIa/b, XXVa/b, XLa, XLVI, LXII, LXVI, LXVIII, LXX, LXXIV, XXVI, XXXIV, I?, III, XXIX [complete]; Signature of former president Millard Filmore on front pastedown, with date of Oct. 25, 1859. Filmore (January 7, 1800 - March 8, 1874) was the 13th President of the United States (1850-53). Fillmore and his cabinet rode the first train from New York City to the shores of Lake Erie, and was a big proponent of a transcontinental railroad, urging Congress to authorize the federal funding for one.; This is the California/Oregon volume, with the report by Lieutenant Henry Abbot on the expedition, under the command of Lieutenant R.S. Williamson. They were attempting to find routes from the Sacramento Valley to the Columbia River. The first section described the routes and terrain, followed by sections on the geology, the botany, and the zoological report which included fishes, birds and mammals of the region.; JC consignment; shelved case 1. 1284714. Shelved Dupont Bookstore. (Inventory #: 1284714)
$800.00 add to cart or Buy Direct from
Second Story Books
Share this item

New York : Limited Editions Club , 1940
(click for more details about PRIDE AND PREJUDICE [SIGNED])
View all from this seller>