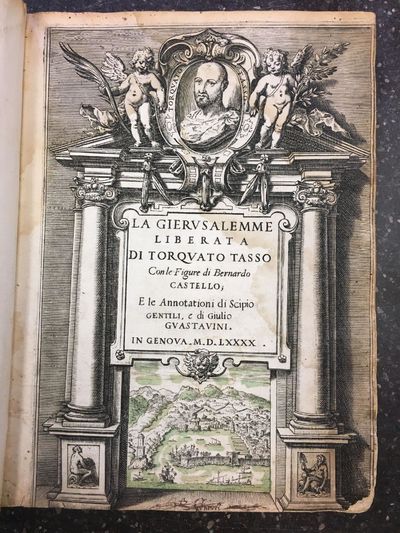 by Tasso, Torquato
Genova: [Appresso Girolamo Bartoli], 1590. Hardcover. Small Quarto, 11, [1], 255, [1], 71, [1], 40, [8] pages; G; bound in contemporary vellum, paneled spine, one panel with burgundy label and gilt lettering, one panel with black lettering; mild soiling and wear to vellum; illustrated title page, some early green coloring, lower fore corner missing a small chip; with 20 full-page plates, one bound at the beginning of each of the 20 cantos; the ninth and sixteenth plates have been pasted onto a new sheet and tipped in, presumably either from damage to the sheet or mating from another copy; EM consignment; shelved case 3. Torquato Tasso (1544-1595) was an Italian poet of the 16th century, best known for his poem Gerusalemme liberata (Jerusalem Delivered, 1581), in which he depicts a highly imaginative version of the combats between Christians and Muslims at the end of the First Crusade, during the Siege of Jerusalem. He suffered from mental illness and died a few days before he was due to be crowned on the Capitoline Hill as the king of poets by the Pope. Until the beginning of the 20th century, Tasso remained one of the most widely read poets in Europe. The poem is composed of 1,917 stanzas in ottava rima (15,336 hendecasyllabic lines), grouped into twenty cantos of varying length. Edmund Spenser described Tasso as an "excellente poete" and made use of elements from Gerusalemme liberata in The Faerie Queene. The description of Redcrosse's vision of the Heavenly Jerusalem in the First Book owes something to Rinaldo's morning vision in Canto 18 of Gerusalemme. In the twelfth canto of Book Two, Spenser's enchantress Acrasia is partly modelled on Tasso's Armida and the English poet directly imitated two stanzas from the Italian. The portrayal of Satan and the demons in the first two books of Milton's Paradise Lost is also indebted to Tasso's poem. [wikipedia]. 1302652. Shelved Dupont Bookstore. (Inventory #: 1302652)
$2,800.00 add to cart or Buy Direct from
Second Story Books
Share this item

New York : Limited Editions Club , 1940
(click for more details about PRIDE AND PREJUDICE [SIGNED])
View all from this seller>