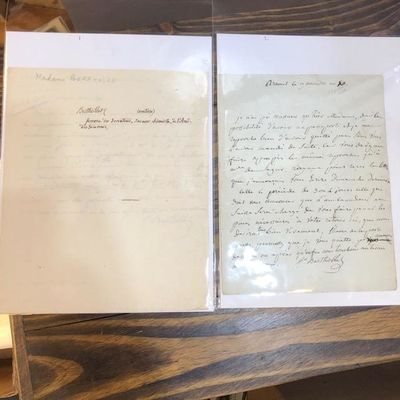 by Madame (Countess) Berthollet
1803/1804/1808. 1) ALS. "F. Berthollet." One page (of a bifolium) in French, 7.25" x 8.75", Arcueil [France]; May 28, 1803. In this letter to an unnamed minister, Madame Berthollet requests the original letters from Berthollet [her husband or herself?] requesting assistance with finding an administrative position for two people when the minister sends his recommendations for said people to give to officials at the administrative offices they wish to enter into.


2) ALS. "F. Berthollet." One page (of a bifolium with an integral address sheet) in French, 6.5" x 8", Arcueil; July 29, 1803. In this letter to a Madame Vinneux in Lausanne, Madame Berthollet informs her friend that she will be able to obtain a passport for her and that the ambassador to Switzerland will assist her with the necessary steps for her return to France.


3) ALS. "F. Berthollet." Three pages (of a bifolium with an integral address sheet) in French, 6.5" x 8.25", Arcueil; June 11, 1804. In this letter to Madame Vinneux, Madame Berthollet opens by speculating that passport troubles are being caused by "cette saison" [presumably meaning the contemporaneous political situation] and will seek information about the delay experienced by her friend in obtaining permission to travel. Mme. Berthollet was convinced her friend was on her way and assures her that she and her husband speak of her and "their second son," Déodat, at every meal. Meanwhile her husband has received a "new distinction" from the government that she describes as more of a burden than a privilege since they must outfit an "archbishop's house" with furniture, linens and all the rest [Claude Louis Berthollet was made a Grand Officier de la Légion d'Honneur in 1804].


Consignment; shelved case 0. Madame Berthollet was born Marguerite-Marie Baur and in 1778 married the French chemist Claude Louis Berthollet (1748-1822), the French chemist who is known for his scientific contributions to theory of chemical equilibria via the mechanism of reverse chemical reactions, and for his contribution to modern chemical nomenclature. 1322202. Shelved Dupont Bookstore. (Inventory #: 1322202)
$1,800.00 add to cart or Buy Direct from
Second Story Books
Share this item

BAKING WITH JULIA: SAVOR THE JOYS OF BAKING WITH AMERICA'S BEST BAKERS [SIGNED]

Gretna : Pelican Publishing Company , 1990
(click for more details about THE DOOKY CHASE COOKBOOK [SIGNED/INSCRIBED])
View all from this seller>